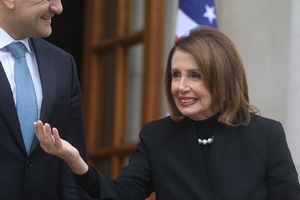 Taoiseach Leo Varadkar with Speaker of the United States House of Representatives Nancy Pelosi outside Government Buildings in Dublin during a visit in April.

“Whatever form it takes, Brexit cannot be allowed to imperil the Good Friday agreement, including the seamless border between the Irish Republic and Northern Ireland,” Pelosi said. 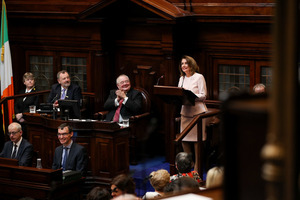 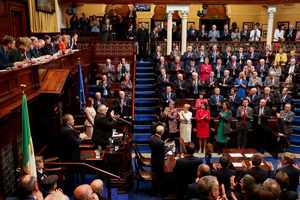 Speaker of the US House of Representatives Nancy Pelosi is addressing both houses of the Oireachtas and Bono.

“This month we mark the anniversary of one of the greatest achievements of that spirit of hope and a faith that a better future is possible.

The signing of the Good Friday accords in 1998, ending centuries of conflict. On that holy day, the world saw the dawn of peace in Northern Ireland, which few had ever dared to dream.

With the diplomatic leadership of President Bill Clinton who sends you his regards, when he found we were coming….” 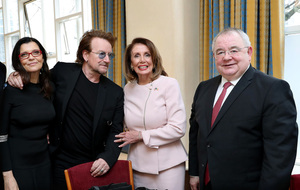 “We’ve learned so much at U2 concerts about what’s going on in Ireland. And we were delighted to see Bono in the gallows of the GPO last night – a picture of David Trimble and John Hume at a U2 concert in Belfast in 1998.

“Bono is here with his wife Ali Hewson, who is there. Thank you both for being here [applause].

“I take pride in saying that I’m one of the members of Congress who’s been to more of Bono’s, U2’s concerts than anyone.

“Now, he’s in the audience. Thank you Ali, and thank you Bono, for being here, and give my regards to the rest of U2, The Edge and others.

“Something I learned from my children, from Michael Keneally and then my grandchildren, we all know, I usually do not intrude on music of my children. That does not apply to U2.” 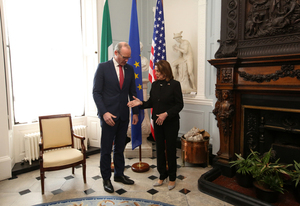 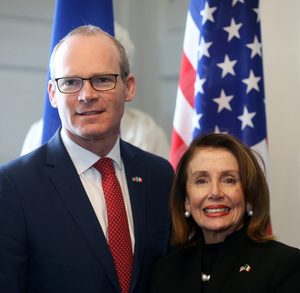 Minister for Foreign Affairs Simon Coveney with Democrat congresswoman Nancy Pelosi, speaker of the United States House of Representatives, who is addressing both houses of the Oireachtas tomorrow. 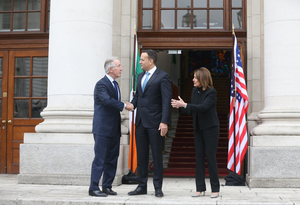 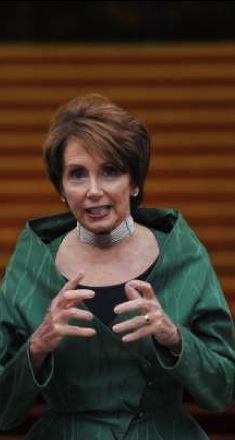 The theme of Ms Pelosi’s address was E Pluribus Unum (out of many, one.) She spoke a great deal about the importance, in both Congress and the Phil, of discourse, debate and radical ideas. Sadly, all three were in tragically short supply last night.

Thirty seconds couldn’t pass without the Minority Leader receiving rapturous applause for truisms which, if a student delivered them in a Phil debate, would be considered uninspired and deeply naive. Its omissions were far more striking than its inclusions. There was hardly any mention, for instance, of November’s elections.

Of course, Ms Pelosi continues to be a great inspiration. As Speaker she was probably the most powerful elected woman in history and did a huge amount of good, particularly in health care reform, which she discussed as the great achievement of her political career. However, anyone who had come to see a display of political intellect and insight could only be disappointed, on hearing instead niceties and saccharine repetition of commonplace political rhetoric.

Ms Pelosi spoke about the need for greater female representation in leadership, which she suggested would provide answers to the big questions of politics; economics, government and National Security. There was no reference to or criticism of the barriers to that empowerment.

She recalled Kennedy’s visit to Ireland, when he commended the Irish on their support for the UN’s nuclear non-proliferation treaty. Ms Pelosi then celebrated Presidents Reagan and Obama’s continuation of the effort for nuclear non-proliferation, an issue on which (allegedly) Republicans and Democrats are united. Cue loud and lengthy applause, led by Senator Norris. No question regarding the USA maintaining a vast store of nuclear weapons, and arguably using them to underwrite their dominance in on-going acts of military aggression.

Another gaping silence came, highly unusually, from Senator Katherine Zappone, who lauded the Irish and American constitutions as connected documents, promising equality and justice for all. To be clear, this is the same Katherine Zappone who is in the middle of large-scale legal proceedings, specifically because in the name of the Irish constitution she and her partner have been denied equality and justice.

The event fed a niggling suspicion that the special political relationship between Ireland and America is built on the exchange of platitudes and shamrocks, rather than ideas. In the end, Senator Norris did highlight the disagreements between the Irish and Americans, specifically referencing the Iraq War. However, he chuckled; there was no reason to introduce dissent into the evening. There would be plenty of time for that later after a few “convivial glasses”. It’s Ireland after all; have a drink and everything will be fine. 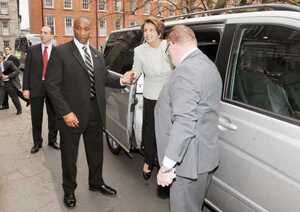 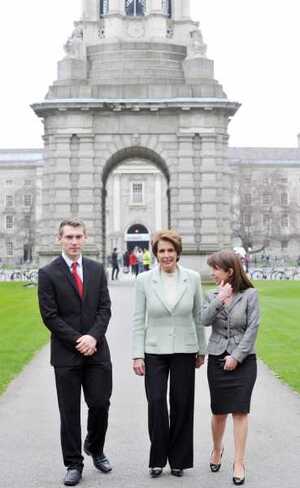 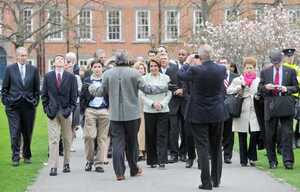 Democratic leader of The US House of Representatives Nancy Pelosi at Trinity, College, Dublin, [with, pic 2: President of TCD’s Philosophical Society, Eoin O Liathain and Vice-Provost of Trinity, Prof Linda Hogan] where she will later tonight collect the Golden Medal of Honorary Patronage from the ‘Phil’.