China warned it would take strong measures if US House of Representatives Speaker Nancy Pelosi visits Taiwan following media reports she would go next week.

China considers democratically ruled Taiwan its own territory and the subject is a constant source of friction between Beijing and Washington, especially given strong U.S. military and political support for the island.

The possible visit has not been confirmed by Pelosi’s office or Taiwan’s government, but some Japanese and Taiwanese media reported it would take place after she visits Japan this weekend.

Chinese Foreign Ministry spokesperson Zhao Lijian told reporters that Beijing firmly opposed all forms of official interactions between the United States and Taiwan, and Washington should cancel the trip.

Taiwan is part of #China + recognised as such by #UN but now #US is stoking tensions- US military have even been in Taiwan training local forces. US + #EU are interfering in China’s domestic affairs- a violation of Art 2 of UN Charter- EU must stop working for US state dept… pic.twitter.com/C4VWV6wgzn

With these statements Mick Wallace gets, by my reckoning, more coverage in Chinese than in English.
In Chinese-language media he appears as an overseas vindicator of the CCP’s positions on Taiwan, Xinjang etc.
You can follow it by searching his name in Chinese: 米克·华莱士 https://t.co/0rgRK7HYnA pic.twitter.com/2ZDwk3IzAF

Previously: A Great Bunch Of Lads

Taiwan’s health authorities say that as of Monday, deaths after vaccination reached 865. While deaths from the virus are 845.

Must be a bad batch.

More Die After Vaccination Than From COVID-19 in Taiwan (NTD) 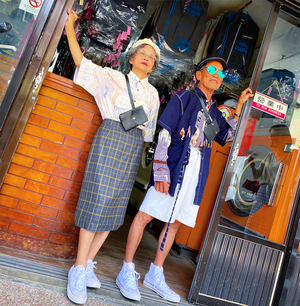 83-year-old Chang Wan-ji and 84-year-old Hsu Sho-er – proprietors of Wansho Laundry in central Taiwan – have been repurposing items abandoned by customers to create their own adorable fashion statements, lately documented by their grandson.

A bamboozling immersion in the busy scooter-filled streets of Taiwan by Tokyo based filmmaker Hiroshi Kondo, who specialises in capturing the endless motion of high density urban environments.

Full screen and sound up for optimal enjoyment.