People over 65 advised not to drink tea with meals (RTÉ) 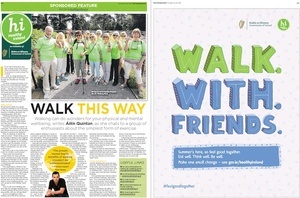 OK. Nothing to see here. Just a two-page advertorial paid for us in the Irish Independent extolling the virtues of…walking.

Who knew the health benefits of putting one foot in front of the other? Let’s hope it catches on. Thank you, government of Ireland. 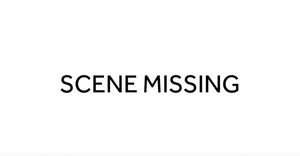 How your Xmas Guinness ad may look under ad blocking measures to ‘curb’ alcohol consumption in Ireland.

This (above) is what an iconic Irish beer ad, from the legendary Guinness brand, would look like under proposed new measures in the Public Health (Alcohol) Bill…

…a sledgehammer approach to the alcohol and hospitality sector which hurts consumers, producers and those of us who believe in individual freedoms and not being treated like children.

Politicians love this Nanny State stuff, as it distracts from the real pressing issues and gives them easy publicity and the approval of media experts.

Hopefully, others in our political culture will see through this easy populism and how such blanket unproven measures hurt industry, retailers, the tourist trade and ordinary consumers.

Hopefully, they will call a halt to this censorship and business-damaging measure. Enough is enough. 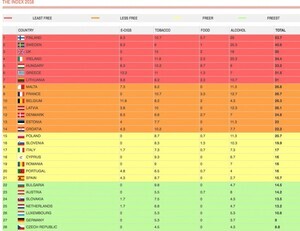 Ireland’ ranks 4th in the league table of the worst places in the European Union to ‘eat, drink, smoke and vape’.

The EU Nanny State index, compiled by the Institute of Economic Affairs in London, in partnership with EPICENTRE (the European Policy Information Centre), is published in Ireland by the Hibernia Forum today.

This is without even factoring in new measures, like proposed calorie counts on restaurant menus, a controversial sugar tax and ridiculous notions like reducing the playing of jingles on ice-cream vans to prevent children over-eating ice cream and getting obese….

Enough is never enough for the authorities, with smokers forced into virtual seclusion to partake of their (still legal) habit – and so far unable to avail of the ‘reduced risk’ smoking products which the Government appears unwilling to give them the alternative of.

This is a strange approach, and a hypocritical one, given that the government gets so much tax in actual cigarettes.

It is the same with alcohol, where the State takes over 50pc of the retail price in tax, despite preaching about its ills.

And the same prohibitive approach as was used on cigarettes is now focused on alcohol, with a mooted ban on the low-cost selling of alcohol in supermarkets, as well as a proposal by the Oireachtas health committee to raise the price of wine so that no bottle can be bought for less than €10, for ‘public health reasons’.

This is an utterly unfair sledgehammer approach which punishes the many for the sins of the few.

Plus, there is also absolutely no evidence that such punitive pricing will improve public health. Wine drinkers are hardly the problem end of the drinking culture. The experts must surely know this, but they press ahead regardless with what seems like yet another Nanny State edict, seized upon by attention-seeking politicians and quangos.

Nanny State status a result of politicians who want to be seen ‘doing something’ (Eamon Delaney, Independent.ie)

Weirdly, he looks exactly like Karl when he was a toddler.