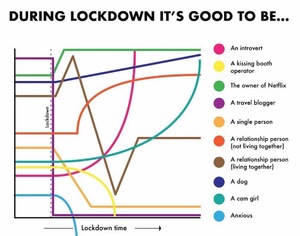 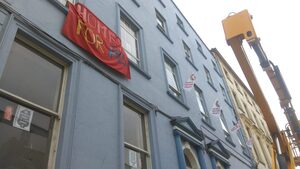 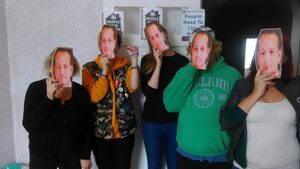 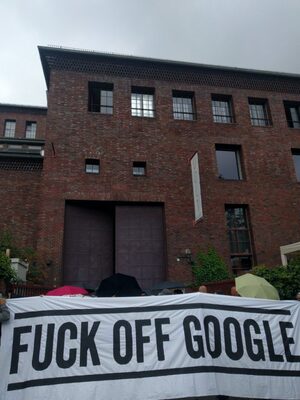 A group of activists have occupied the city’s planned Google campus.

A small step for Kreuzberg but a great step for humanity. Google Campus is being squatted right now.

Related: ‘Google go home’: the Berlin neighbourhood fighting off a tech giant (The Guardian, May 8, 2018) 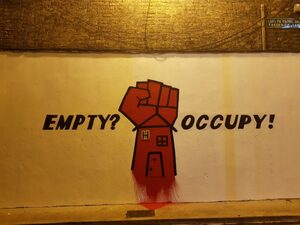 Take Back The City tweetz:

Shoutout to Subset Dublin for this amazing piece. Their Grey Area Project is a response to prohibitory planning laws which hinder artists’ self expression. This latest piece is an expression of solidarity with our direct actions & we absolutely love it… 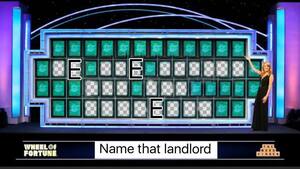 As the occupation of 34, Frederick Street North, Dublin 1 by housing activists continues…

Take Back The City writes:

Picking out a lovely new little gaff for us to occupy is like eating pick ‘n mix – there’s just so much to choose from! As supporting numbers have been increasing steadily since the North Fredrick Street take over we have decided to double the fun with sweet, sweet occupation number three.

Ye heard us right, double – we aren’t moving, but expanding. Occupation three will be held in conjunction with North Fredrick Street, building an occupation community so to speak.

While all occupations hold a special place in our hearts this one is set to be a show-stopper. To keep you all guessing, we will be adding letters to the wheel of fortune board [above] each day in lead up to the grand reveal.

We are calling on people to gather at the GPO at 5.30pm [on Saturday] where we will take to the roads together and walk to our next addition. Saturday will be Day 4 of resisting the injunction at 34 Frederick St North!

Mothers and students, workers and teachers, care leavers, couch surfers and renters have taken the brave step together to face down an injunction. We Need Your Support!

Groups have been occupying buildings now for 23 days, with three goals, 1) to spark off the housing movement through radical action, 2) to build community, and 3) to expose who is causing the housing crisis. We have stood our ground, but now is the time for the movement to grow.

In Dublin we are calling on groups to rally in support on Saturday the 1st, for groups to step forward to join us and break the injunction. If they can’t take this step, defend us from the outside and write statements of support.

Outside Dublin we are calling on people to do solidarity actions and to join us on the 8th of September in Dublin for the relaunch of the Irish Housing Network.

If groups want to take radical direct action, including occupations, get in touch and lets spread this fight across the island! Three years ago, when housing activists stood down from their occupation of 38 and 39 Bolton Street after the council took them to court for trespassing, they didn’t feel too bad, says Séamus Farrell.

Dublin City Council had said the buildings – which it owns – would be turned into accommodation for people who were homeless. That was something they could rally behind, said Farrell.

But it hasn’t happened yet.

The two tall buildings in the north inner-city are still empty, with boarded-up windows and shuttered doors, and advertising posters plastered to the front wall.

“It’s not surprising, it’s disappointing,” says Farrell, an activist who was involved at the time. He is now among those who have taken over a Georgian building on Summerhill Parade… Previously: Meanwhile On The Back Door Of Occupy Cork’s Occupation