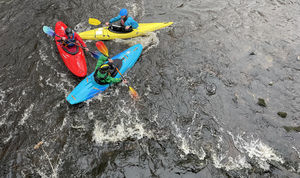 Members of the Kilcullen Canoeing Club, celebrated the lifting of Covid restrictions from 6am yesterday, by taking to the waters and the wild today, to make the trip on the River Liffey, from their clubhouse in Kilcullen, County Kildare to the Millers Weir Bridge in the hamlet of Blackrath and Athgarvan, a journey of over 5km, due to the winding nature of the river. The photos shows members waiting their turn to come ashore after arriving at the bridge in Blackrath and Athgarvan.

Minister for Transport, Tourism and Sport, Shane Ross in canoe and Minister of State for Tourism and Sport, Brendan Griffin (right), with Angel O Toole and Evan Brazil while officially launching the National Sports Policy 2018–2027.

He’s a danger to himself and other canal users. 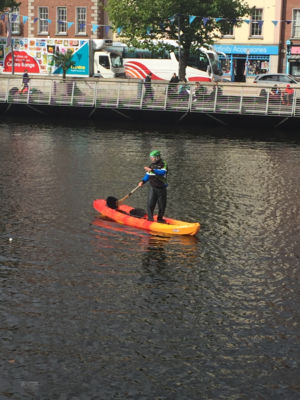 On the River Liffey in Dublin.

Guy in a canoe, with a helmet and hurl pucking sliotars. Being photographed for something?

An amazing challenge, in fairness.

A great cause, to be fair.

Two lads – Pearse O’Toole (Up Spiddal!) and Ruairí Leddy (Cmon’ Roscommon!) – are canoeing around Ireland….AROUND THE ENTIRE island – in aid of Console, Ireland’s National Suicide charity, starting on 24th July from Galway. Any support and awareness you can raise, much appreciated.

I saw your post about Kayak for Console and thought I should mention a duo currently out on the water doing the same trek.
Jon Hynes (top left) and Sean Cahill  (right) set out on the 16th June from the Old Head of Kinsale to paddle around Ireland. They are currently almost home (Wexford) having braved mountainous seas and weather.
They are raising money for the Cappanalea Centre down in Kerry to allow them to install a hoist for wheelchair access to canoes and kayaks. They are documenting the whole adventure on facebook [link below]. Above is the lads squeezing through Diarmuid and Grainne’s Rock at Loop Head. Co. Clare…

If you can handle the appalling camerawork up to about 1.10, there’s an adorable payoff as a bunch of excitable Australian canoeists are boarded by the only extant representative of the family Phascolarctidae.

Canoeing through a McDonald’s in the flooded Brisbane suburb of Milton.