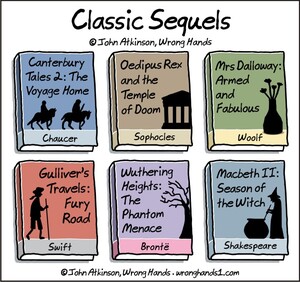 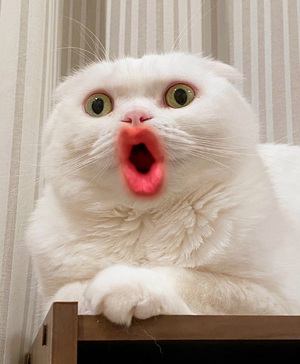 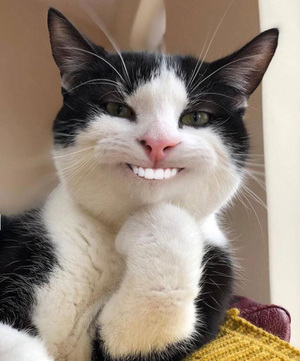 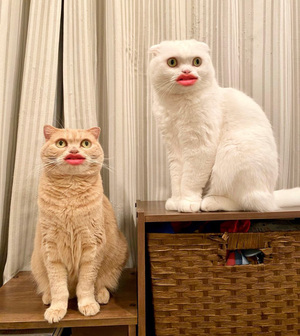 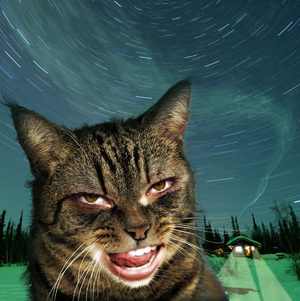 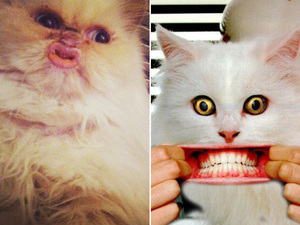 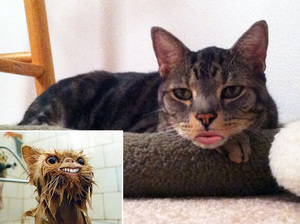 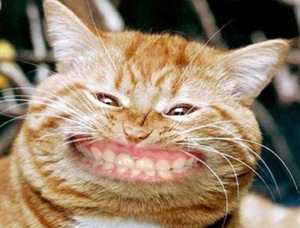 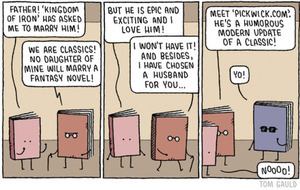 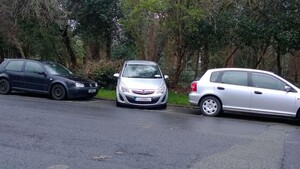 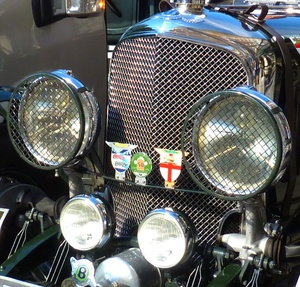 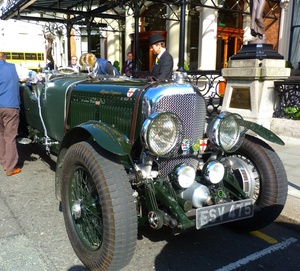 A 1929 Bentley Alpine Express being strapped up with suitcases for a flying tour of the Riviera, or Moate, or somesuch outside the Shelbourne Hotel, in Dublin half an hour ago. 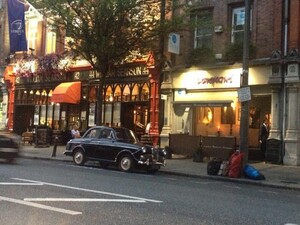 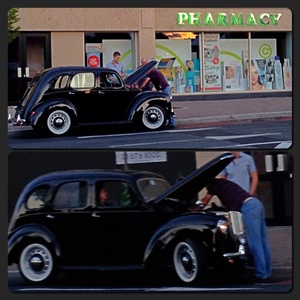 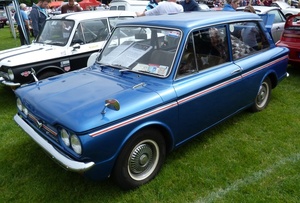 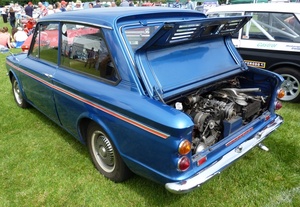 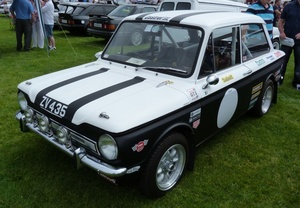 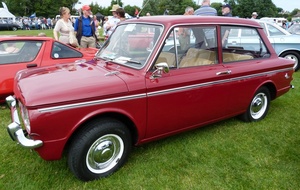 Where were we? Ah yes…

“There was a healthy selection of Hillman Imps and similar derivatives. The red was a clean standard example with its 875cc engine. The racing liveried model is the Hillman Super Imp which was further upmarket and aimed at a flashy clientele. It is from 1973 and was restored to its current state in 2009. At the bottom in blue we have the rear of a Sunbeam Imp/Singer Chamois Sport from 1972. The front boasted “Sunbeam” though the twin-headlights would suggest its sister Singer Chamois Sport. All Imps had rear engines which made handling setup a bit awkward though it did boast independent rear suspension. This one was restored in 2011. 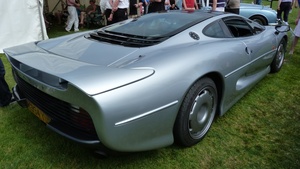 Once the fastest production car in the world, the Jaguar XJ220 was never intended to be released to the public and was originally a prototype machine to demonstrate Jaguar’s engineering excellence. Demand was so high, however, that Tom Walkinshaw’s Jaguar Sport company developed a road-going version with a 500bhp V6 Twin Turbo engine and rear-wheel drive layout. It’s sleek aerodynamic design helped it reached almost 220mph and it held this record until the launch of the McLaren F1 a few years later.” 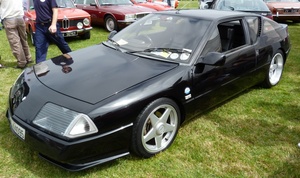 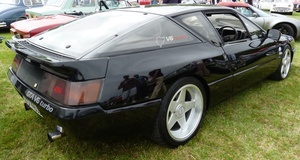 Renault-owner manufacturer, Alpine, have produced some of the most beautiful sports cars/coupes although there haven’t been countless amount. This is the Alpine GTA, an example from 1988. It features the very lively 2.5L V6 PRV Turbo engine and is lowered on adjustable coilovers. The interior is very 1980s – the sound system includes analogue control of the equalizer!” 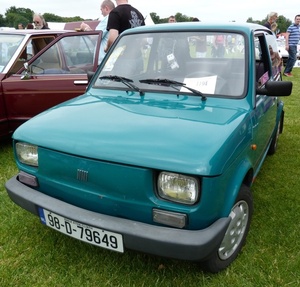 And now, without further ado…

“The Fiat 126 (above) replaced the iconic Fiat 500 in 1972 as Fiat’s small city car. This one is an ELX model and, although it was registered here in 1998, it was manufactured in 1980 according to the owner. Brought in from Poland, the engine is of air-cooled type and apparently 570cc though I’m sure that was just a rough figure – 126s were 594cc standard as per wikipedia. Bumpers were plastic for all models from 1984 onwards but the ones on this example were originally chrome and were replaced with these. Some other minor parts are not original such as the Fiat Cinquecento steering wheel but it’s mostly as it was in 1980. The owner quoted a figure of 15 euro to fill the tank and drive 300 miles. He says it can run at 120kmh but you wouldn’t want to be stressing the engine to that speed regularly.” 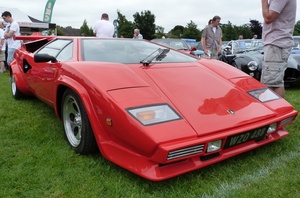 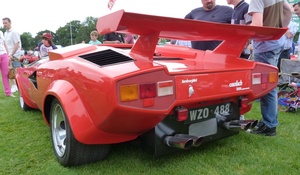 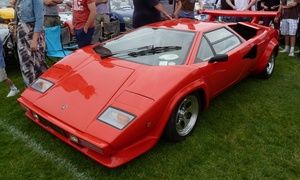 “At first glance, you could be forgiven for thinking this is a Lamborghini Countach. It looks like one. It says Lamborghini Countach on the back. But it’s quite far from the childhood dream-car I grew up drooling over. Rather, this is a Countach kit and is only ‘tached as far as the shell and even that has some differing aesthetics to the original Lambo. Many replicas have been produced and this one boasts the famous Rover V8 engine. The owner is considering putting some BMW engine into it (M5 I think)…” 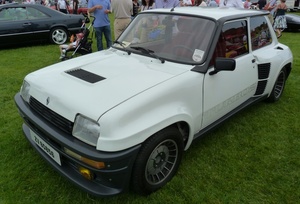 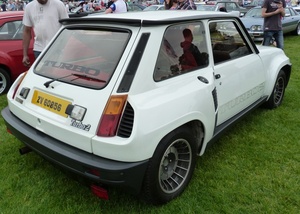 “When Renault wanted to go rallying in the Group B era of the early 1980s, they needed to produce 400 road going models of their anticipated rally machine – in their case, the Renault 5 Turbo. After 400 high performance street models were made, production continued with the Renault 5 Turbo 2. This was not an evolution, rather a regression in that many more stock Renault 5 parts were used. Though performance was comparable with the original version. This is a 1983 model still in left-hand drive. There is 18k miles on the clock and features that awesome mid-engined, rear-wheel drive layout that put it on a different planet to the standard 5.” 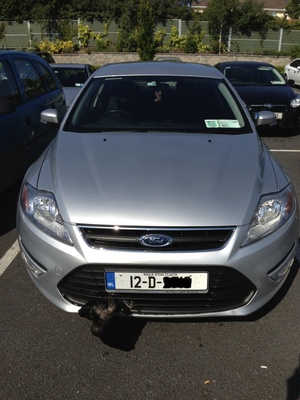