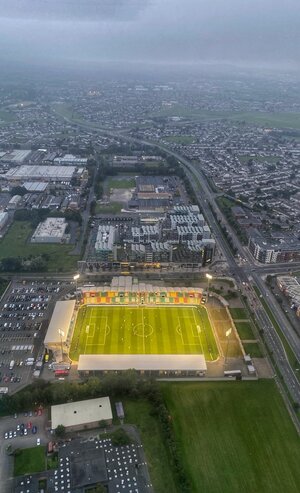 Aerial view of Tallaght Stadium, home of Shamrock Rovers and host of AC Milan in the Europa league.

Liquid football (and commentary), in fairness. Football fans light flares as they are escorted by the Garda Public Order Unit directly to Dalymount Park football stadium, ahead of tonight’s Bohemians vs Rovers FAI Cup semi-final match. A Garda ban on overtime was lifted in order to provide coverage for the match. It’s not the size of the crowd….

Presenter Eli Mengem was well impressed: “I Knew it would be unique but didn’t think this match would put on some of the scenes it did. Full credit to all the football fans in Ireland who despite all the other sports on offer, and bigger football codes across the border, do the right thing by the game and support the local scene.
The more that Irish football fans turn out and support the League Of Ireland, the more money the league will have to buy better players and facilities which will mean better football and more fans…
Furthermore the celebration I saw Boh’s fans enjoy were as good as anything Ive seen with Copa90 at the Camp Nou, Bernabeu, Anfield or San Siro. Cause its not about the size of the crowd, its about the type of fans in it. The ones on the terraces in Dalymount are definitely it.Well done, and be proud of the effort you put in supporting local team, you may not be in the Premier League but you really impressed Copa90 and I.” They do look nicer green, in fairness.

“Remember I gave you the heads up on this kid? I’m guessing after tonight, he’s defo set to become a star.. Mascot at Tonight’s Chile v spain World Cup game in Brazil…” Hoop in a world gone sour. Another great sports cake. Check out my Rovers one… These little scamps are getting everywhere. This was in the jacks in Dublin Airport…