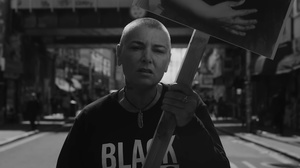 Sinéad O’Connor – Trouble of the World

This is a protest song. 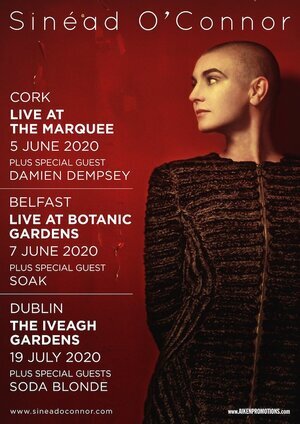 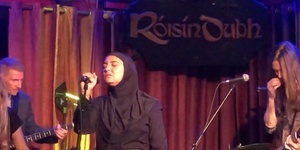 Sinéad O’Connor performs Nothing Compares To U to an intimate, but sold out crowd (the best kind, in fairness) Thread by @audrawilliams: “In 1992, Sinead O’Connor ripped up a picture of the Pope on live television, in protest of the rampant child sexual abuse the Catholic Churc […]”

Toxic masculinity, how are ye? Thank you so much to all my Muslim brothers and sisters who have been so kind as to welcome me to Ummah today on this page. You can’t begin to imagine how much your tenderness means to me ❤️❤️❤️❤️❤️❤️❤️ Last week, police in Illinois released a statement expressing their concern for singer Sinéad O’Connor as she had gone for a cycle and hadn’t returned within 24 hours. She was later found safe and well.

When my best friend Joe died, I was an angry young man. We got drunk, we got stoned, we attended the Funeral . . . and then life just went on. The world kept turning and there was no such thing as counselling or grief recovery in the early 1990s.

It was nobody’s fault. Everyone around me was trying to cope with their grief in their own way and my little sister, Cliona, had passed away less than a year earlier. People shrugged and told me to get on with things.

As a young Irishman, I didn’t know how to talk about feelings . . . not without alcohol on board at any rate.

Of course, there was no Internet in those days. I didn’t rant on Facebook after returning home from the pub at 4am or put up photos on Instagram of my friends and I drinking ourselves into oblivion, which was the norm for most of my friends at the time.

We didn’t think there was anything unusual about our hard drinking, we were just wild, out for the craic, living all the Irish clichés. It probably took years for me to realise that there was a lot of pain hidden behind that heavy drinking.

For me, one of the constants at the time was the music of Sinead O’Connor. I came home from a summer in London to become enraptured by this gorgeous, provocative diminutive singer who seemed to speak out for my generation in a way nobody else dared to.

I was 20 and I hated Ireland. I wanted to be back in London, going to punk and metal gigs, following my beloved Liverpool FC around. I wanted the freedom of meeting women from Italy or Spain or England, who were far more liberated than I was.

Back home, I wondered how somebody from my generation could be so daring, so sexy, so sure of her own voice in late 1980s Ireland.

When she sang ‘I Want Your Hands On Me’, Sinéad was sexy in a way which seemed almost impossible for a young Irish person at the time. In those days we wore woolly jumpers as though we were ashamed of our own bodies.

In a country in which there was no contraception, no divorce, no abortion, this young woman from Dublin sang with a raw honesty which was simply incredible. Hell, there were still women living in Magdalene Laundries at the time.

Women who had committed the ‘crime’ of getting pregnant in Catholic Ireland were locked up barely a ten minute walk from my newspaper office, the sex abuse cases which rocked the Church had not yet been exposed, and hardly anybody questioned what was going on.

When Sinéad (she’s so familiar, we call her by her first name) combined with the brilliant Benjamin Zephaniah to sing a song about the crimes committed by the British Empire, I was immensely proud.

When she reached number one with ‘Nothing Compares To You’, it felt as though there were boundless possibilities for a young Irish person who spoke out or sang the truth. I wasn’t mad into pop songs, but there was such passion in her voice.

I grew up on metal and punk, outlets for my rage in a very repressive Catholic Ireland, and here was an amazing young woman from Dublin who was willing to take on the world.

When she tore up a photo of the Pope, I thought she was a little misguided but I was also immensely proud. Nobody, yes nobody, was that brave in Ireland at the time.

Sinead O’Connor’s music has been a constant in my life for more than half my life. I don’t claim to know her, although I did meet her once in Galway during the height of a summer Arts Festival. I was struck by how unassuming and shy she was that night, for someone who was a hero for so many of my generation on the Emerald Isle.

I thought about Sinead again this week, when a friend of mine alerted me to a troubling post on her Facebook page.

It was deeply personal and should never have appeared on a public social media site in the first place.

It shocked me when I did a Google search to find that quite a number of media outlets had shared the post in full, as though this very public meltdown by a ‘celebrity’ – or cry for help – deserved to become a form of entertainment.

No doubt the post, and the subsequent media reports, must have caused anguish to her close friends and family members as Sinead was clearly not in a good place when she wrote it.

I didn’t read it in detail and I most certainly didn’t want to read the comments underneath, but what shocked me was the fact that more than 1,000 people had taken the ‘trouble’ to ‘share’ it with their friends.

This was just two days after she had been reported missing by friends where she was staying, near Chicago. Thankfully, she was found safe and well.

Social media has transformed our lives in many ways, but have we become so dehumanised that we see entertainment value or ‘news’ in someone else’s anguish?

She might be a famous singer, but she is also a human being, facing the kind of troubles, challenges, and life-changing events we all have to face every day.

If she was clearly not in a good place on Tuesday night, where was the value in reading her deeply personal rant, aimed at some of the people closest to her, or sharing it on social media?

Or, worse, making jokes on Twitter about the whole sorry affair?

It was clearly of no concern to the online editors that this in-depth coverage of such a vulnerable woman in distress might be deeply hurtful to Sinead and her family and friends.

Getting clicks on their website was clearly of far more importance than the well-being of a woman who was going through a tough time.

In 2016, a public figure’s meltdown can become a form of entertainment which would have been unthinkable back when my friend Joe died back in 1990.

Life was hard enough for me and my friends back then, without people making jokes on Facebook or posting insensitive remarks.

So … have we really moved on?

Ireland is going through a mental health crisis and the turn-out at this month’s Darkness Into Light walks (an estimated 120,000 across the country) showed that thousands upon thousands of people felt that the State is not doing a good enough job in this area.

Organisations like Pieta House and Console exist because our State health service is not addressing the crisis in mental health.

When I was in A&E with the MRSA ‘superbug’ last year, a young man who clearly had mental health problems was left languishing in a hospital corridor for hours.

He should have been in a state-of-the-art unit, not mixing with elderly people and accident victims lying on trolleys in an overcrowded corridor.

I wonder sometimes if the support available to a 20-year old whose best friend dies in 2016 is any better than it was in Ireland a quarter of a century ago.

I treasure Sinead as one of the most gifted songwriters of my, or any, generation. I firmly believe that people will still listen to the music of Sinéad and Shane MacGowan long after most of today’s artists are forgotten.

But her personal demons are none of my business. I’m not going to ‘share’ them on Facebook as some form of titillation for my friends. I’m certainly not going to make hurtful jokes about a troubled soul on Twitter.

I only hope she gets the help she needs.

That’s all that matters right now for Sinead, her family, and her friends.

The reaction on social media made me wonder whether we really have progressed from the witch trials and public hangings of the Middle Ages.

For all our technology, have we become so dehumanised that a public figure’s tragic meltdown is worthy of a click on a keyboard, or a Facebook share, on social media?

Do people even stop to think about the damage they cause when they post vicious or mocking posts about someone who is clearly going through a tough time?

It doesn’t seem that way. People post words on social media which they would never dare to utter to a person’s face.

We might be “connected” to each other 24/7 through our laptops, tablets, and smart phones, but in many ways we’ve become “disconnected” from our fellow human beings … We sit behind keyboards, poking fun at people who only need our help and good wishes as they struggle to make the most of this crazy, complicated life.

And, what’s worse, many of us don’t even think we are doing anything wrong.

Have we really moved on? (Ciaran Tierney) JUST IN: Police in Illinois concerned over disappearance of Sinead O’Connor. She was last seen riding a bike @6am. pic.twitter.com/dBmVCSkfZ1

UPDATE: It’s being reported that Sinéad has been found safe and well. OK, the time has come for me to cease singing Nothing Compares 2U. The first principle of the manner in which I’m trained as a singer (Bel Canto) is we never sing a song we don’t emotionally identify with. After twenty-five years of singing it, nine months or so ago I finally ran out of anything I could use in order to bring some emotion to it.

I don’t want audiences to be disappointed coming along to a show and then not hearing it, so am letting you know here that you won’t. If I were to sing it just to please people, I wouldn’t be doing my job right, because my job is to be emotionally available. I’d be lying. You’d be getting a lie. My job is to give you honesty. I’m trained in honesty. I can’t act. It just isn’t in my training. I have ceased singing other songs over the years for the same reason.