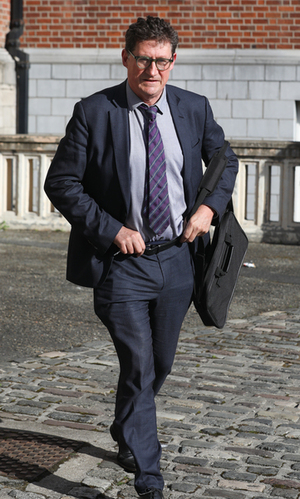 An extension of the lower VAT rate for the hospitality sector is being timed in a way to give the industry the best chance of getting back on its feet after Covid-19, according to Minister Eamon Ryan | Read more: https://t.co/NCy8xQ825S pic.twitter.com/rSK1jNLjp2 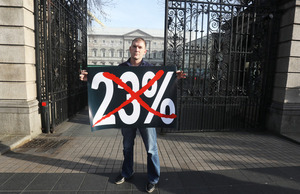 Putting 23% on Food Supplements and Vitamins will break everybody’s heart. 14 days to say NO to 23. pic.twitter.com/Tk9aoK4VU2

People Before Profit TD Gino Kenny (top) joins campaigners against the increase of the VAT on vitamins, minerals, fish oils, and probiotics –  currently  zero-rated  – and calling on the government to reverse the 23% increase which is imposed on March 1.

Previously: Health food stores could close if Government goes ahead with hike in VAT NewsBrands Ireland is an umbrella group which represents national newspapers, in print and online.

It released a statement this afternoon, following Minister for Finance Paschal Donohoe’s announcement that the Government is maintaining the 9% VAT rate for printed newspapers and cutting the VAT rate from 23% to 9% for the papers’  digital content.

NewsBrands Ireland had been lobbying the Government to reduce both the newspaper and digital VAT rate to 5%.

NewsBrands Ireland Chairman, Vincent Crowley said: “We welcome the Minister’s decision to maintain the 9% VAT rate for printed newspapers and also to cut the VAT rate to 9% for digital publications, which will reduce the cost of access to quality, independent Irish journalism for people who access their news online.

“Most European countries apply zero or super-reduced rates to newspapers in recognition of their core societal function. Hopefully today’s news is a step in the right direction and that next year’s budget will see further progress in this regard,” concluded Mr Crowley.

NewsBrands Ireland will continue its #JournalismMatters campaign to push for policy measures to support independent journalism and bring Ireland’s policies into line with our European counterparts. In recent weeks Fintan O’Toole has at great length called upon the people of Ireland to follow him in adopting a more challenging and complex view of identity.

It is therefore surprising that he should so soon afterwards have chosen to write Tuesday’s crass and superficial commentary on Fianna Fáil’s housing policy.

Instead of addressing the full policy, he unfortunately chose to caricature one element of it and compare it to an unclear story about the purchase of a pub a quarter of a century ago.

Because Fintan O’Toole decided that there was no need to complicate his piece with any context or extra information, let me explain what we have been talking about concerning increasing house supply.

We have for a number of years been pointing to the inevitability of the housing emergency that has grown because of the neglect and lack of basic planning by the Fine Gael government.

This applies to every type of housing – from private rental and social housing to owner-occupier.

The decision of Fine Gael and Labour ministers to effectively abandon the social and affordable housing sector has caused particular destruction – with there being in place today 6,000 fewer social houses than there would be if the rate of building in 2010 had been maintained (just 2,400 have been built since 2011).

This is not to mention the damage done by their decision to reduce by half the Part V obligation on developers (which provided 16,000 new social and affordable homes) and to abolish all affordable housing schemes for low- and middle-income workers in 2012.

The sole objective of our policy is to increase the supply of more affordable housing and we have proposed a wide range of measures to achieve this. This prioritises the interests of individuals and families, not builders or developers.

These include a return to the building of significant numbers of social and affordable houses by local authorities and approved housing bodies. But we cannot ignore the role of the private sector.

The reality is that the State will never be able to build enough social and affordable housing to accommodate housing needs of all low- and middle-income households. It is fantasy to suggest otherwise.

This is why we proposed to directly incentivise the construction of units (houses or apartments) to be sold below affordable price points.

This would involve the application of the special rate of VAT (9 per cent rate) only on residential properties sold below an affordability threshold, such as €350,000 to €400,000.

A unit sold above the affordability threshold would not be able to claim special rate VAT reduction.

We still need economic analysis from the Department of Housing to assess the full impact of this on the market and what the cost to the exchequer would be. While we have asked for the specific information, it has not been provided.

To suggest that this is some dark, corrupt idea is absurd. If Fintan O’Toole wants to argue that it wouldn’t work he is welcome to do so, but this type of ad hominem attack is not what one would expect from the holder of a George Orwell award for commentary. “So in very simple language, if I don’t bring it back I have to find something like €360 million elsewhere.

Noonan added, “when local Government and lobbyists were sending in their pre budget submission, they might suggest who I tax instead to get €360 million”.

An ITIC report states that the cost for restaurants, hotels and tourism visitor fees to the State has cost €90m.

The 9,000 jobs created in tourism and hospitality has saved the Exchequer (welfare bill) €123m. Previously: Do You Take Tips? Update: Upon closer inspection, the cow, is indeed a Belgian Blue.

The #KeepVat9 campaign is being launched this morning.

“VAT at 9% has had a positive effect on all aspects of the restaurant sector specifically, but also the wider tourist industry generally. This is why the RAI fervently believes it would be foolhardy to get rid of it. Reducing VAT to this level is a real success story so the RAI is sending a clear message to Government saying Keep VAT at 9%” INDEPENDENT TD Mick Wallace will put half his €92,000 Dáil salary towards repaying the €2.1 million Revenue debt of his construction firm MJ Wallace Ltd.

In an emotional personal statement to the Dáil about his tax affairs and under-declaration of VAT, the Wexford TD apologised for “an error of judgment” and said he would “not defend the indefensible. The company understated its VAT liability and we were wrong to do so.”

Mr Wallace also apologised “to the members of this Dáil for bringing any dishonour on a profession which hardly needed it”.

Wallace to pay half Dáil salary to Revenue (Irish Times) “And they all moved away from me on the bench
there, and the hairy eyeball and all kinds of mean nasty things…”
(Alice’s Restaurant by Arlo Guthrie)

INDEPENDENT TD Mick Wallace is facing censure by his Dáil colleagues and a possible criminal prosecution over his admitted under-declaration of VAT payments by his construction firm.

Fellow members of the Dáil technical group last night joined in the condemnation of his €2.1 million settlement with the Revenue Commissioners, while Fine Gael and Labour TDs called on him to consider his position.

Mr Wallace faces up to five years’ imprisonment if prosecuted and convicted over his under-declaration of VAT over a two-year period.