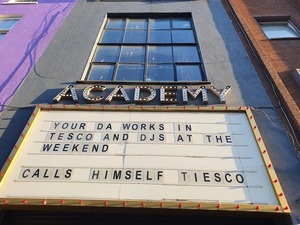 Anyone who browses gig listings like I do every week, may have noticed that The Academy venue on Middle Abbey Street in Dublin has not hosted an event for a while.

I presumed it was due to a planned break, but today, it was announced that the venue has been renovated into a “contemporary performance space that draws influence from the Victorian music hall style,” and the refurbishments include new lighting and upgraded sound system.