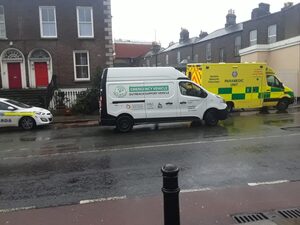 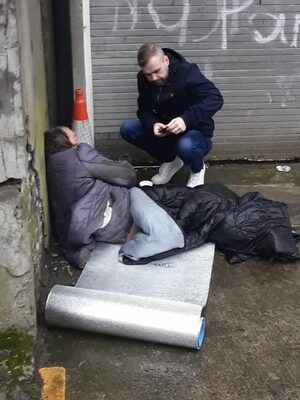 “Society is failing our elderly!!!!

This morning we have been called to a lady who slept in the rain last night. The lady was soaked to the bone, is in her late 60s, suffering with dementia. She has been transported to hospital.

Thanks to the gardai and ambulance services.”

Met Éireann have forecast that temperatures could drop to -4C tomorrow night and Saturday night.

“The Woman’s Body Was Found In Her Room” 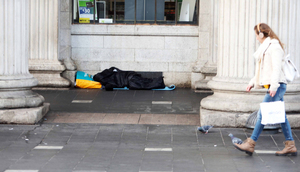 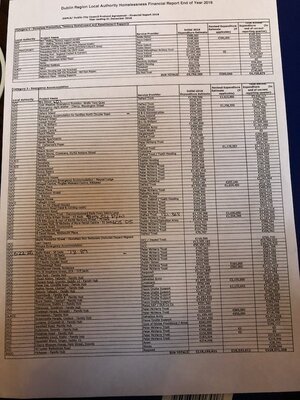 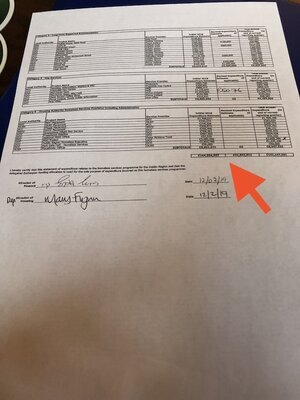 I’ve just received the expenditure by Homeless Dublin for the 2018 period (above). The figures are to say the least outrageous. A total of €141,147,361 was spent in Dublin alone. A full and complete review is needed here… 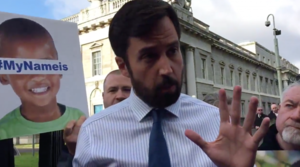 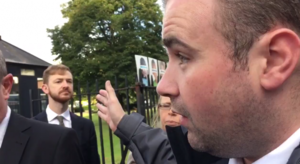 Where an “emergency housing summit” is taking place in which the Minister for Housing Eoghan Murphy will meet CEOs of the local authorities across Ireland and their housing personnel.

And further to the Department of Housing releasing figures yesterday which show 8,160 homeless people – more than a third of whom are children – were living in emergency accommodation in the last week of July.

Anthony Flynn, of Inner City Helping Homeless, a voluntary group which has been helping homeless people in Dublin for the past four years, confronted Mr Murphy.

Anthony Flynn: “We’ve looked for several meetings with you.”

Eoghan Murphy: “We have a huge amount of people…”

Flynn: “We understand that. But ou’re bringing the CEOs in here today. The people who are actually on the ground, doing the work on a nightly basis, that are looking at these people that are dying on our streets. We’ve had five deaths in less than a week and your office has failed to communicate to us, with regard to…hang on, let me finish.”

Flynn: “Not only the work that we’re doing for the last four years on the streets but the My Name Is campaign has travelled this country in regards to child homelessness and the unprecedented levels of child homelessness that are happening at the moment. And yet we haven’t had the respect of a reply from your office.”

“Your predecessor Simon Coveney would meet me in the Gresham Hotel on a weekly basis to discuss issues in regards to homelessness, yet your office couldn’t do that.”

“Now we’re here today, you’re calling in the CEOs of the local council. We’ve heard from the Housing SPC chair that the council haven’t got the money to build, that your department is not releasing that money to build housing, ok.”

“So if they haven’t got the money, how are they expected to build. This meeting today could be a waste of time in our opinion if the CEOs are not being given the money from your department.”

“Or Paschal Donoghue doesn’t want to have to take that money down because it affects your GDP and it affects the market.”

Murphy: “Can I respond? There’s not a problem with funding at all. This year we’re going to build four times as many social houses that we built in 2015 and we have more money to re-prioritise that into social housing as well.

“The local authorities have to work with the housing bodies to actually build new houses and that’s what we want to do. Hold on, I’m here talking to you now and I’ll talk to anyone about the issue but I’m working on this every day.”

“It’s a top priority for the Government and you need to understand that.”

“The reason the local authority chiefs are coming in today is because I’m funding them directly and they’re directly responsible to me. We’re building social housing and dealing with this crisis and that’s what we’re talking about today.”

How many is that exactly? 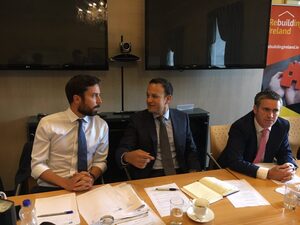 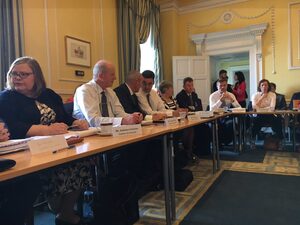 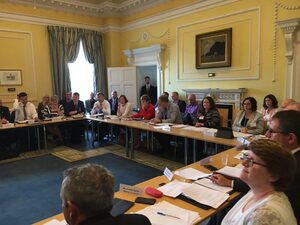 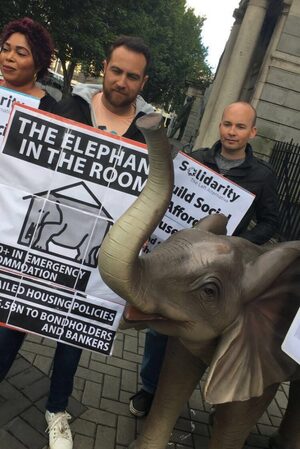 And the award for best prop at a photocall goes to Paul Murphy and Solidarity’s elephant in the room about homelessness. 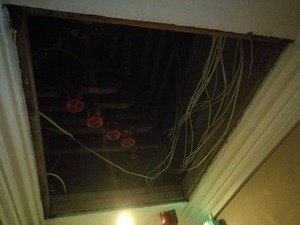 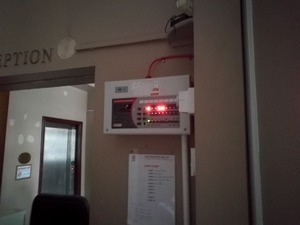 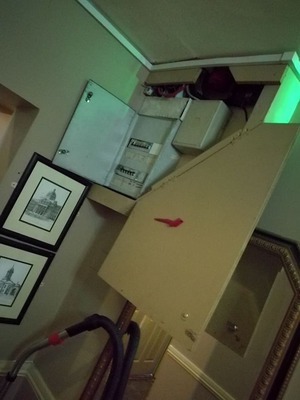 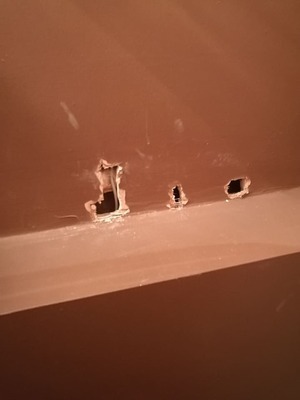 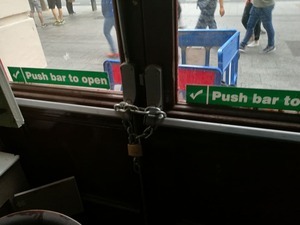 The building is currently being turned into a so-called family hub.

Spent the day at Lynam’s whilst in and out of scheduled meetings, [today] will engage with the HSA and Tulsa, alongside Dublin Fire Brigade, in order continue to make sure that this site is not used for family or any other type of habitation.

The pictures tell a story look at the fire panel, would you let your children sleep here? Locks on fire doors, this is a total disgrace. My question is, who authorised its use?

Why do so many homeless hostels only open at night? (Laoise Neylon, Dublin Inquirer) 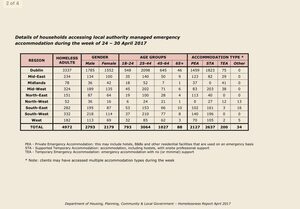 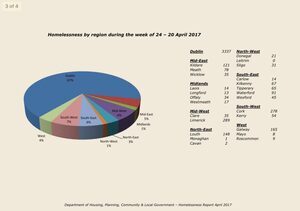 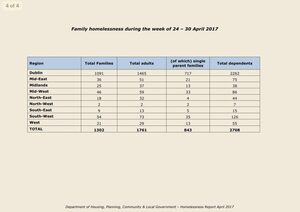 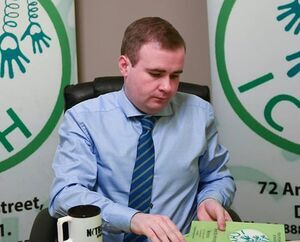 Anthony Flynn, of Inner City Helping Homeless, and new figures from the Department of Housing

Just before the Fine Gael leadership debate in the Red Cow Inn, Dublin.

During which contender and Minister for Housing Simon Coveney said the party needs to represent both “the man in a sleeping bag on Grafton Street tonight as well as the man creating 1,000 jobs”.

The latest homelessness report, for the week April 24-April 30, 2017 from the Department of Housing was released, showing that the number of people who are homeless has reached a new record high of 7,680 – 4972 adults and 2,708 children.

The last number of days have been fairly chaotic when it comes to homelessness. Tuesday in particular, we saw the highest ever recorded number of rough sleepers and a drastic situation of no hotel/B&B accommodation for 12 families.

This led to a frenzy of supports required to be put in place and services increased to cope with demand. A number of families were referred to Garda stations as there was nowhere else to go. One such family had to be accommodated within our offices until supports could be put in place Wednesday morning. Some of those that were affected slept in tents others in cars.

How did we come to this situation?

A lack of short to medium-term planning is the best answer I can give. A complete lack of inter-agency communication and a lack of will from the powers-that-be. The eye has been taken off the ball in regard to homelessness and the long-term planning aspect has left short-term problems. Homelessness has become a crisis right across the State but hasn’t been treated as such. Our volunteers deal with thousands of individuals weekly, many of whom have become lost in a system of ‘no hope’.

I have spent the last four years in a voluntary position within Inner City Helping Homeless; I have met an abundance of people, from homeless to colleagues. I have made some great friends and am privileged to lead an organisation that shows empathy, compassion and is made up of decent human beings.

This week however, I can say that it has been the worst week I have seen within the homeless sector. Up to 30 children refused accommodation, whilst those who are charged with solving our homeless crisis enjoy their evening off.

Families sent from pillar to post in order to be left with no hope, no accommodation and no home. Homeless has become an epidemic, a plague that has spread so wide across our city and state.

Homelessness has become a business, a sector, it cost in excess of €100million a year to operate. To some that means profit, which in turn means that homelessness will remain.
This however should not take away from our responsibilities, people are suffering.

Children are being now left on the streets, a prediction that Father Peter McVerry made only a year ago. Homelessness has become socially acceptable. It has become tolerable to pass somebody by in a doorway, it has become bearable to leave families stuck in hotels, and now, this week, it has become justifiable to leave children without a bed. 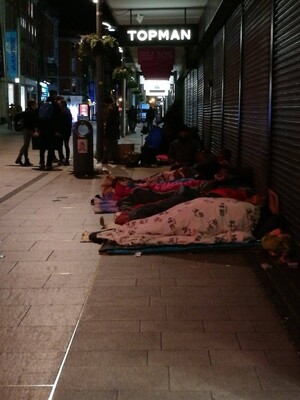 “We have over 40 people bedded down at present here and it is still very early. This situation has been at peak level for a number of nights but this is the worst I have ever seen it. Homelessness, homeless services are in turmoil.”

“Our coordinator has diverted outreach support teams from other locations to deal with the influx in this particular area and our resources are being severely drained. At present, a 27% increase in presentations across the city is what we are dealing with. Our committed and dedicated volunteers are trying to make everyone as comfortable as possible. We need accommodation and urgently.”

“This has been ongoing for five nights now with no Government or State-funded body intervention. A meeting will be held at 9am in order to try and alleviate the problem to some extent, but unfortunately enough is just not being done. We are doing our best in a voluntary capacity.”

“I am calling on the Minister tonight to come and look at this and tell me to my face that Government are doing all they can. This is just unacceptable. The homeless tsunami has hit us and this is like something from I’ve never encountered before.”