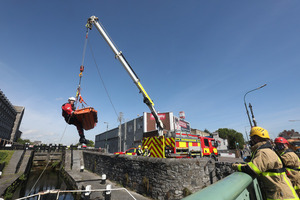 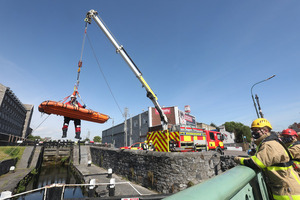 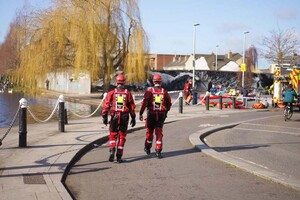 Covid masks in the water, anyone? Dublin Fire Brigade tackle a fire in an abandoned building. A Dublin Fire Brigade mural based on an award-winning photo “Response” by Fiona Brennan. He fiddled while saving Dublin.

My dad, historian and former Dublin Fire Brigade museum curator, is in this brilliant forthcoming tribute to the great Tommy Potts. Part of a very special digital Musictown this year. Presented by Dara Yeates

Tommie Potts: The Fireman Fiddler of the Coombe premieres on September 17 at 8.30pm Live streaming on Facebook:  and Youtube. Dublin Lord Mayor Tom Brabazon presenting a bronze plaque to Tara St Fire Station to thank the members of Dublin Fire Brigade based there for their efforts during COVID 19 so far.

The Lord Mayor will present plaques to all Fire Stations in Dublin City on behalf of the citizens of Dublin City as a token of their appreciation. Big thanks to Aer Lingus for the safe delivery of specialist ‘truck-mask’ PPE for our fire appliances.

They will help provide fresh filtered air to the engine and cab.

Remember wash your hands often, stay at home, and maintain a 2 metre distance if you have to go to the shop. We’ve made good progress at the industrial fire in Swords and will be scaling back the response. Units will stay on scene damping down. Smoke was visible over a wide area in clear skies.

Our turntable ladder is acting as a water tower at the Kettles Lane fire in Swords. This means the fire can be extinguished from above #Dublin #fire #Fingal pic.twitter.com/wNIxnwofB6 Dublin Fire Brigade firefighters were called out to 230 incidents between 4pm and 6am.

These included fires at (from top) Malahide, Ballymun, Darndale, Kildare (pic 4 and 5) and Fortunestown.

He said this was a decrease in incidents compared to previous years and said no firefighter suffered any injury last night.

However, he said, throughout the city, attempts were made to stop the firefighters from entering some estates.

He said at the entrances to some estates, they found that either cars had been driven into fires or set alight or bonfire material was set alight.