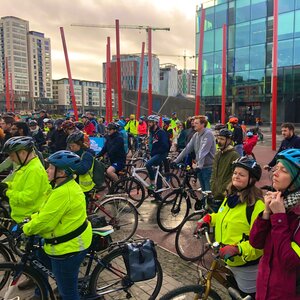 The Dublin Cycling Campaign and their supporters held a “slow cycle” along the quays of the River Liffey “due to ongoing delays in developing the Liffey Cycle Route”.

The current official plans for the Liffey Cycle Route wouldn’t see the project implemented until 2024 at the earliest – that would be 13 years after the project was first proposed! This is a bicycle. Cold day for a ride. #volkspod

Volkspod – the twin fruit of a year long garage project by maker Brent Walter who combined front and rear VW Beetle wheel arches to form bizarre (and yet adorable) carapaces for two custom made scooter chassis. My aunt’s bike was stolen from Rathfarnham last Sunday, distinctive feature is she cut the handlebar to expose the end to put In the mirror.

This is what happens when you leave your bike lying around when the royals come to visit. #RoyalVisitIreland pic.twitter.com/2qwwqka7St

Earlier: They Think It’s All Rover