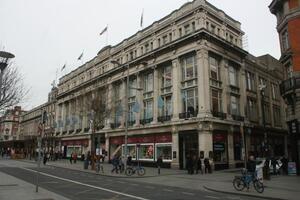 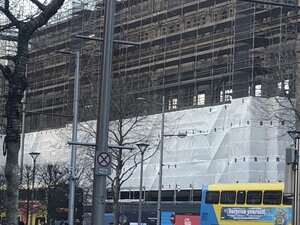 Clery’s, a robust nineteenth-century building, is being demolished behind facade, as is revealed by daylight coming through the front. All that embodied energy junked. Why?

Previously: Behind The Clock

I actually gasped in horror. This is the back of Clery's. This city is out of control. #DemolishingDublin pic.twitter.com/cp5Nw6UloM 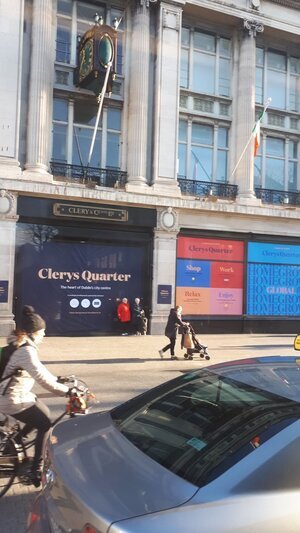 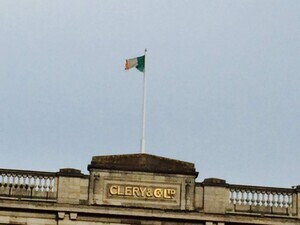 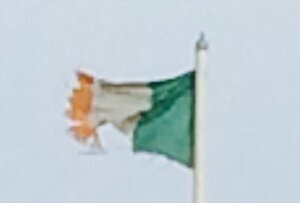 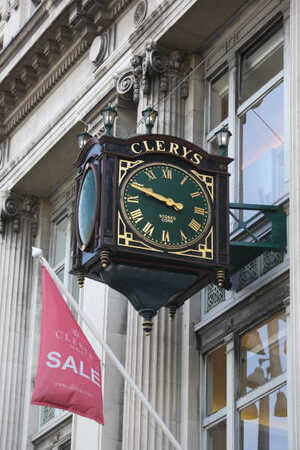 The consortium that bought the Clerys store in Dublin for €29 million is trying to lure Apple to open a flagship retail outlet on the ground floor of the site.

It is understood the Natrium consortium, fronted by D2 Private developer Deirdre Foley, has held numerous discussions with Apple over several months.

…Meanwhile, the Government will on Friday submit a new batch of documents to the European Commission’s investigation into Apple’s tax arrangements in Ireland. The Department of Finance confirmed yesterday that the commisison has requested extra documents.

Previously: How they killed Clerys 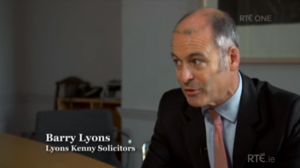 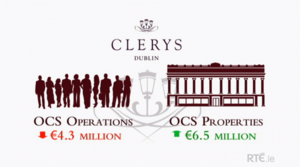 Insolvency solicitor Barry Lyons and a graphic used in RTÉ One documentary, Clerys

Last night RTÉ One broadcast an hour-long documentary, by Judy Kelly, about the closure of Clerys last year with the loss of 460 jobs.

It included interviews with former employees, such as Maurice Bracken, who had worked at Clerys for 32 years.

Bracken and the other workers – some of whom worked over 40 years at Clerys – only got the statutory redundancy of two weeks’ pay per year of service.

The documentary highlighted how many of the workers felt the Clerys building on Dublin O’Connell’s street should have been sold in order to offer better redundancies.

But it explained that in 2012, the owners of Clerys, Gordon Brothers, split Clerys into two companies – a trading company, OCS Operations, and a property company, OCS Properties.

OCS Operations paid rent under a lease to OCS Properties for the use of the building. Within two and a half years, OCS Operations, which employed the staff and managed the department store, made a loss of €4.3million.

Meanwhile, OCS Properties – which has no staff – made a profit of €6.5million.

“The night before Clerys was closed, a group of people assembled and they conducted a transaction that eventually led to you guys losing your jobs the next day. Natrium bought the entire structure of Clerys, so they bought the parent company and that gave them the property company and the trading company and then we know that immediately, immediately upon doing that, they sold the business that was your employer, the trading company, for €1 to Jim Brydie who was an insolvency specialist.”

“Natrium wanted the operating business to be gone from the group, they wanted it to be separated, to be pushed aside and to be left on its own. It was effectively an orphan then, it had no parent company, it had no lease, it had no money and really it had no chance of survival.”

As the trading company’s lease had expired three months previous, Mr Brydie – a former director of Anglo Irish Bank in the UK – wrote to Natrium asking it to extend his lease but they wrote back immediately saying they’d send a formal notice to quit if he didn’t get out of the building.

“The sequence of events that was laid out to the court, the following morning, was that they all arrived here and then one business was sold and then another business was sold and then there was a board meeting and then there was another meeting with management and each action led to the next action which led to the next action… but if all these things were planned and happened simultaneously, well then, it sort of leads you to the conclusion that maybe all this was pre-ordained. It was never doing to end any other way and, if that’s the case, before any of these meetings happened, Clerys fate was already sealed and when dawn broke, the stage was set for Clerys to be liquidated.”

Mr Bracken, and another former employee, visited insolvency solicitor Barry Lyons to get a greater understanding of what happened.

Mr Lyons had no involvement in the closure of Clerys.

Barry Lyons: “There’s no doubt in my view that it was completely choreographed but at the end of the day, there is a fundamental inevitability about this taking place. The trade is declining, losses are wracking up. Overtime, somebody says, ‘we’ve got to pull the plug’. We’ve got to take a view.

Lyons: “I can’t justify that. What they did was clever, you know, they carved it out, the asset out from the trade, and there you go. I mean everyone was operating on the basis that it was a trading company. Everybody knew that a receiver was appointed. Signal number one: that is not a good sign. Ultimately the property from which it traded was worth a lot of money. So what the Gordon brothers, what they did, is they protected their investment by carving out the property. So it’s very easy to demonise them but this country would be in a far worse state had they not come along and they put their money where their mouth is and they said, ‘we think this is going to come good for us’. And so when you do that, you’re entitled to a return on your money. And I think that’s what they got and this is the fallout, what you’ve described, is the fallout from that.”

Bracken: “They did make millions. Ok, we know they made millions. But they certainly didn’t come in here to help the Irish economy, they only really ever had their shareholders in mind. No one else really cared because when they left…”

Lyons: “No, no other company has anyone other than their shareholders in mind…”

Bracken: “But I think there should be some kind of duty of care to the other stakeholders.”

Lyons: “I understand why they did what they did, it makes sense from a commercial point of view and I appreciate that it hurts but, you know, there’s an orderly process that has to be undertaken. There has to be an event that says, ‘this is now over’. That is never going to happen in a nice way.”

Bracken: “Do you actually admire the way they carried out this liquidation?”

Lyons: “Well, from one point of view, it is very cynical. Do I admire it? Well it seems to have gone off without the whole thing spiralling out of control. So, you know, maybe from that point of view, you have to say, well, it was efficient.” 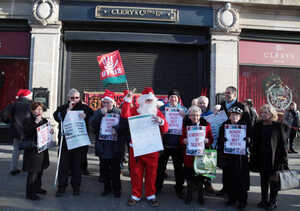 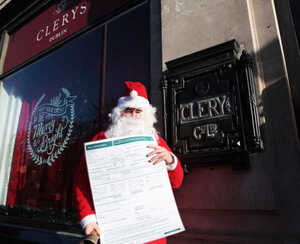 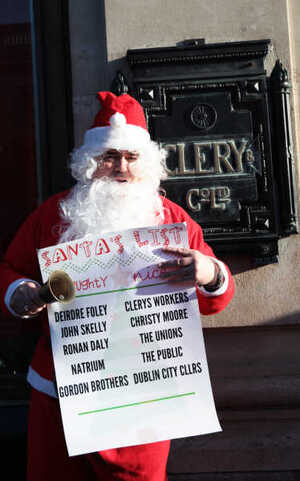 Gerry Markey who worked in Clerys for 34 years as Father Christmas joined fellow sacked workers to highlight the demand for a meeting with the store’s new owners (naughty list, above) to discuss Clerys purchase and its consequences.

Hmmm – Looks like the new #Clerys workers aren’t as nice as the ones who lost their jobs! @broadsheet_ie @Herdotie pic.twitter.com/pNuA9ZSmKX 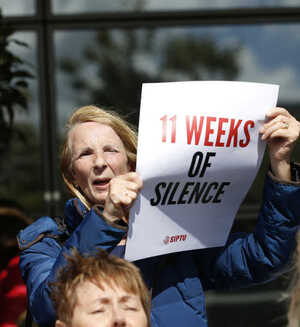 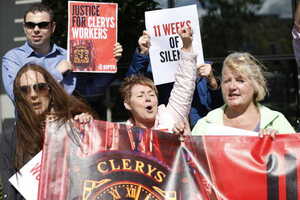 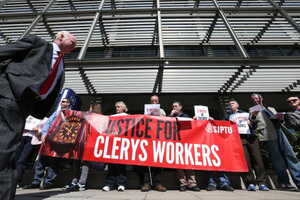 A protest against the ongoing silence of Natrium, the owners of Clerys, over the sacking of 460 workers in June. The department store liquidation will cost the State €2.5m in workers’ statutory redundancy entitlements.

“It has been 11 weeks since the store was closed without notice resulting in hundreds of job losses. Natrium has treated us appallingly while it has made millions out of this deal. The sudden closure of the store caused massive distress to the workers, many of whom gave decades of service to Clerys. All we are asking for is to be treated with a degree of respect. We want Deirdre Foley [Natrium CEO] and the other people involved in Natrium to meet us face-to-face and explain their actions.” 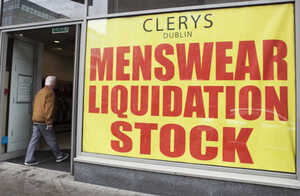 Who’s for the last of the golf fleeces/galoshers?