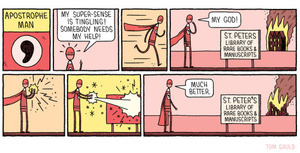 A deft mix of 2D and 3D animation in Blirp Studio’s frantic videogame style tale of space gasman Ed and his mission to defeat the evil Lord Gasidious. The first six episodes expanding on director Steve Barker’s superb and unexpectedly poignant 2013 short, The Video Dating Tape of Desmondo Ray, Aged 33 & ¾ in which a peculiar man searches for love in a dark and troubling world. Classical superhero busts at the Louvre by Parisian artist Léo Caillard (even he of 2012’s Hipsters In Stone).

Not really. They’re only digital. In case you haven’t seen it yet, photos of a firefighter in Cork giving a rabbit some water after a gorse fire that have gone viral . The man in the picture Tom Collins is my brother, here is a message from him:

“The fire was a gorse fire on the Sheep’s Head peninsula, we were putting out the fire when the rabbit came over to us looking a bit worse for ware. We carry bottles of drinking water with us so the natural thing to do was to cool it down wish a quick wash and give it a drink. Adrian Collins (no relation), a firefighter from Skibbereen, took a couple of photos [above] on his phone.”

The rabbit, meanwhile, ran away on his merry way after a drink….

Yesterday: We Didn’t Start The Fire An infographic from Comicbook.com featuring nearly every actor who played nearly every popular superhero in TV and film. Who is the phone-saving Red Line superhero?

Yesterday evening around 7.20pm as the doors on the redline Luas began to close at the Abbey St. stop an opportunistic thief leant in and grabbed my phone from my hand and ran.

Unfortunately for him, I had no intention of letting my precious phone go so easily and I ran out after him shouting something along the lines of “thief give me back my phone (plus expletives!!!), while trying to grab a hold of him.

Seconds later, now on the platform, just as I lost my grip on him and see my phone slipping out of reach forever, out of nowhere the person is tackled and there is he a real life SUPERHERO fighting this guy to get my phone back!

I don’t know where he came from, I don’t think he was on the platform, perhaps from across the road, but this complete stranger jumped in and helped out.

After a struggle I got my phone back and the guy ran off. Mr. Superhero wanted to know if I was ok.

I’m not really sure why I’m writing this but I guess I want to publicly acknowledge his actions and what essentially was an act of bravery, an act of humanity helping a random stranger in trouble. There could have been a knife, needle who knows what involved  he didn’t know what was going on so what he did really was a big deal. He was like Superman – he flew in, fought the bad guy, asked if everything was ok and was gone! Thank you.