A Far Green Country, the debut feature film of autistic Irish filmmaker Jonathan Victory, will be released on YouTube, on Tuesday November 9.

A Far Green Country follows Jonathan as he explores iconic film locations from Lord of the Rings and other stunning sites throughout New Zealand. Filmed in the first month of 2020, Jonathan’s journey sees his plucky enthusiasm collide with the reality of health challenges presented by autism. Traveling alone for the trip of a lifetime, Jonathan pushes the boundaries of his limitations to live life to the fullest. Written, filmed, edited and directed by Jonathan Victory.

The YouTube premiere will be followed by an Instagram Live interview between filmmaker Jonathan Victory and Ian Lynam of AsIAm, Ireland’s national charity for the autism community at 9:20pm GMT on the afargreencountrytravel Instagram page. He ended his address to the nation with a quote from Lord of the Rings:

“In the end, it’s only a passing thing, this shadow. Even darkness must pass. A new day will come and when the sun shines, it’ll shine out all the clearer.” I didn’t realise Frodo was a student in TCD {Trinity College, Dublin]. This is on the noticeboard in the postgraduate room We’ve featured a LEGO Helm’s Deep before, but that pales in comparison with this version built by Goel Kim and Big J. Made up of over 150,000 bricks and 2,000 mini-figs it took a year and a half of preparation and six months to build.

There’s a huge selection of photos on MOCpages and Flickr showing off the sheer scale and detail of the diorama.

The LEGO Battle Of Helm’s Deep A guitar detailed with runes, Nazgul, Minas Tirith, the Eye Of Sauron and all manner of Middle Earthiness rendered with Sharpie pens by talented 16 year-old Vivian Xiao. 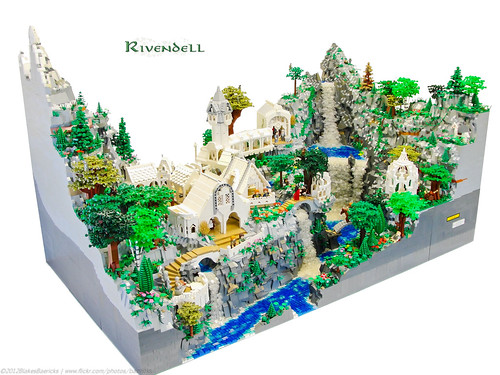 Yet another addition to the growing set of LEGO diorams based on Lord of the Rings (we’ve previously had the Battle of Isengard and Barad Dûr) comes from Blake Baer and Jack Bittner who built this stunning version of Rivendell. They even made a video showcasing it for your viewing pleasure.

[via The Brother Brick] On the other side.

The Shard, London: The View From The Shard Viewing Platform Opens (Telegraph) A Bilbo and Gandalf/ Calvin and Hobbes mashup by CoolJohnny No sign of Micheal Squee, but I’m sure he’ll be in the final edit.