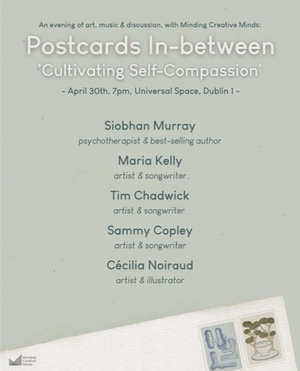 An evening with Irish creatives centred around ‘cultivating self-compassion’.

The ‘Postcards In-between’ project initially started with Maria Kelly asking her fellow Irish songwriters to pen a ‘note-to-self’ letter to a version of themselves that they thought might need a helping hand.

Designed by Irish-French illustrators Nathanaël Roman and Cécilia Noiraud, these postcards will be exhibited in various forms… The exhibition is being run in association with Minding Creative Minds, Ireland’s first 24/7 wellbeing support programme for the entire Irish creative sector. 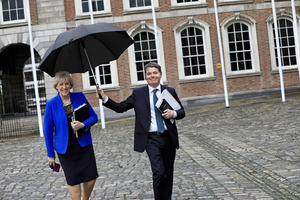 “Some jobs will not come back and there is no point in waiting for the never never… It is best that we help people to re-skill, retrain and look at other jobs they can take up”

More angry reaction from Irish musicians to Heather Humphreys’ “re-skill, retrain” comments. The message is clear; the Government must act to save the industry as we know it https://t.co/1VfCI88Nfy 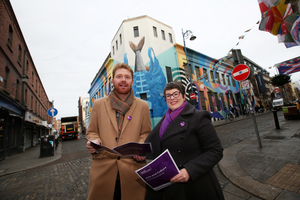 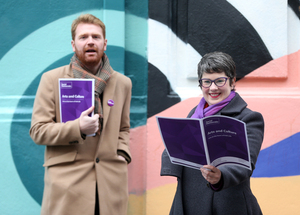 Sarah Durcan, a  member of the Waking The Feminists movement and former board member of the Abbey Theatre, says that Ireland has an international reputation for a rich and vibrant arts and cultural sector “yet it suffers as a result of a lack of investment and the foresight to encourage creativity”.

The party has committted to increasing Arts and Culture spending to the EU average over the next five years – double the present spend.

The party also is proposing drama and theatre studies as a Leaving Certificate subject.

And special commercial rates for creative and art spaces as well as ‘rates holidays’ for new projects are also part of the plans.

Affordable living spaces for artists should also be encouraged, say the party, while it wants an expansion of tax breaks for low income artists…. 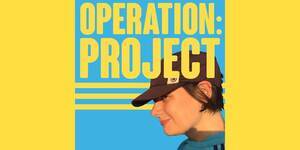 The tough listen to the Operation: Project podcast.

The podcast about the art of actually finishing creative stuff.

Hosted by Caroline Swords (above), who writes:

Over the years, I’ve started a bunch of creative projects I’ve failed to finish. So I wanted to talk to creative people – writers, filmmakers, comedians, photographers, musicians, and more – about how they work, and what they do when things get tough – learn the secrets of finishing.

She constantly gets creative things done, and I wanted to to know how. We talk about getting over your fear of trying, why it’s important to have a few failures behind you, and how to pack out the first night of your new comedy club! 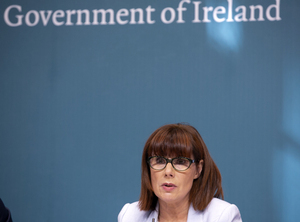 From top:  The Minister for Culture, Heritage and the Gaeltacht, Josepha Madigan TD speaking to the media at Government Buildings yesterday outlining details for her department’s work in relation to Budget 2020; Eamonn Kelly

The budget has not been kind to the arts.

The National Campaign for the Arts said they were “devastated” and feel that the sector is being left behind.

Their head, Angela Dorgan said, in an impassioned press release:

“The announcements today are devastating to Artists’ and Arts workers’ incomes and livelihoods. We feel that despite rhetoric to the contrary, this budget is sending a message to artists that Ireland doesn’t value them.”

But rather than slip into despondent musings, there is an energising aspect to all this. Maybe it’s time to borrow from fiction and declare “I’m as mad as hell and I’m not gonna take this anymore.”

“All power is power over someone,” said Havel, “and it always somehow responds, usually unwittingly rather than deliberately, to the state of mind and the behaviour of those it rules over…”

Power is a two-way street and if the Arts are not being supported by power, and if 10,000 people are left homeless by power while property owners get rich, this is because power has been taught and shaped by people’s passivity.

But with regard to the arts it goes deeper than this. Because the arts are gestures of Hope. The workshops where hope is created.

“Hope, in this deep and powerful sense, is not the same as joy that things are going well, or willingness to invest in enterprises that are obviously headed for early success, but, rather, an ability to work for something because it is good, not just because it stands a chance to succeed…”

What better summation of the arts could that be? To work on something because it is good. (I am indebted to Maria Popova’s Brain Pickings website for collating these insights.) Arts practise itself is Hope. It takes place in a realm where cynicism is absent.

Angela Dorgan said in her press release that the ongoing neglect of the arts makes it:

“next to impossible for our young creative minds to live and work here. They’re all leaving and when they’re gone, who will write the songs and the books, who will create for the theatres, who will create the artworks? Where will the Taoiseach and all the Ministers bring their visiting dignitaries when there is no-one left here to create and make great Art?”

Most people would agree that “good works” are a benefit to society and community. Though I imagine you’d be hard-pressed to find more than a handful of people who could actually describe to you what a good work actually is.

Helping the disabled, might spring to mind. Or visiting the lonely. Those familiar Christian ideas of “good works”.

But Arts practise also belongs in the realm of good works. It is not work that is of immediate apparent benefit to the fast buck understanding of the utilitarian, but arts practise percolates through the culture and enriches everyone.

Why does everyone listen to songs? What could be more useless than a song? A bauble of nothing, loosely chained by a few words and a tune, that drifts on the air? And yet everyone keeps at least one song locked away in their heart, like a treasure.

Paul Simon wrote of this in his song Renee and Georgette Magritte, about the surrealist artist and his wife coming to New York.

Of all the wonders that they witness, they keep hidden in “the cabinet cold of their hearts”, songs by the doo-wop groups of the time; cheap throwaway, worthless pop songs.

In this song Paul Simon identifies not only the spiritual worth of the apparently worthless bauble of a song or a tune among even the finer arts, but also the mysterious value of art itself in a world ruthlessly defined by economy and the bottom line. But not everything’s value can be measured in cold stats.

He shows, in a song, that in the end the simple popular song is often more valuable to the soul than money. Because the song, like all the arts, contains within it, the seeds of hope and love upon which all humanity invests its private, often unspoken dreams.

When you starve out the arts, you ultimately starve out your own soul and the soul of the culture. 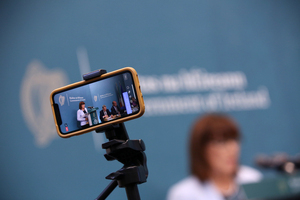 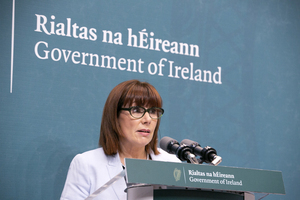 Josepha Madigan (above) Minister for the Arts, Culture and the Gaeltacht outlined the spending available to her department in Budget 2020 – a reported  €354 million.

€7 million will go to peatlands restoration and conservation works, resulting in 1,800 hectares of restored peatland in 2020, 100 jobs being generated, and 28 million tonnes of carbon dioxide being stored.

€7.1 million in capital funding will be provided for the European City of Culture- Galway 2020

Screen Ireland is to receive additional funding of €1 million following the government’s decision to extend the Section 481 Film tax credit to 2024 and the regional uplift of 5%.

An additional €900,000 will be allocated to the Decade of Centenaries 2020 Programme and will include commemorative events such as Bloody Sunday on November 21 and the execution of Kevin Barry on November 1. 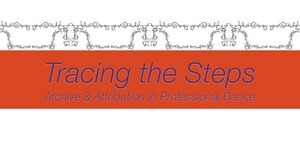 A ground-breaking event exploring “open innovation approaches to arts and technology this Thursday in Dublin’s Docklands.

Via Tracing The Steps:

Blockchain has the potential to revolutionise all our lives and how we understand the supply of goods and services – and now arts. DLT’s hold immutable data in a secure and encrypted way and ensure that transactions can never be altered.

To explore this potential, we will hear experienced and expert contributions from the worlds of Dance and Technology, along with live performances devised by Cathy Coughlan of Havoc Dance.

From the tech sphere, we will have contributions from Dr. Oisin Boydell and Saad Shahid of CeADAR Research Centre, Fiona Delaney, Open Innovation specialist and Founder of Origin Chain Networks, along with Ismael Arribas, arts entrepreneur and Blockchain expert from Spain.

We will also have a legal contribution from Yvonne McNamara who is a Barrister- at-Law and Intellectual Property (IP) specialist,

Admission is free and all are welcome, especially for those in the arts community and with an interest in #blockchain and #DLT beyond the cryptocurrency use case. 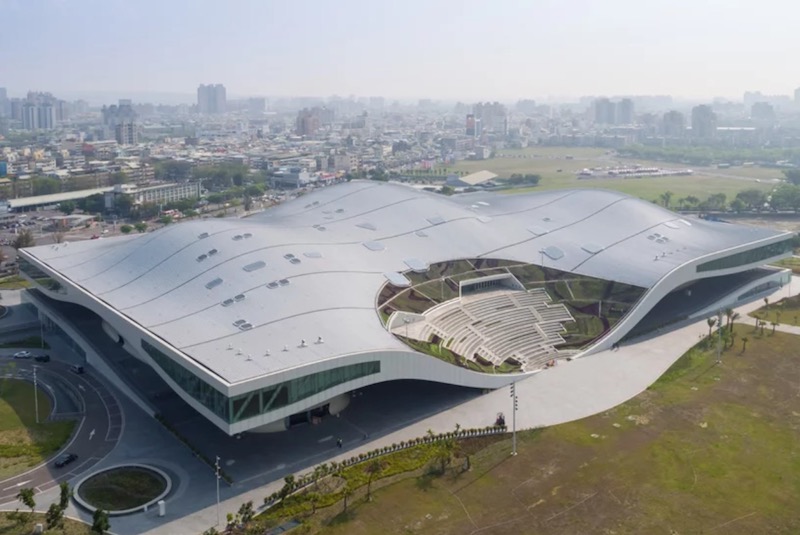 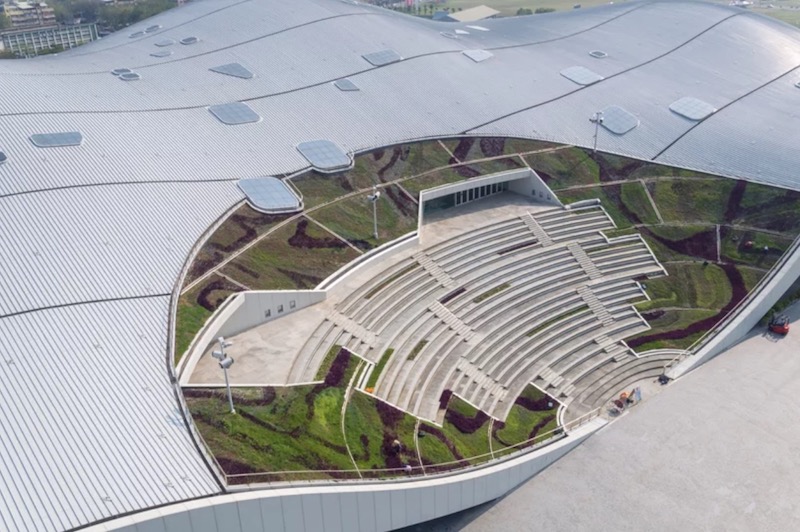 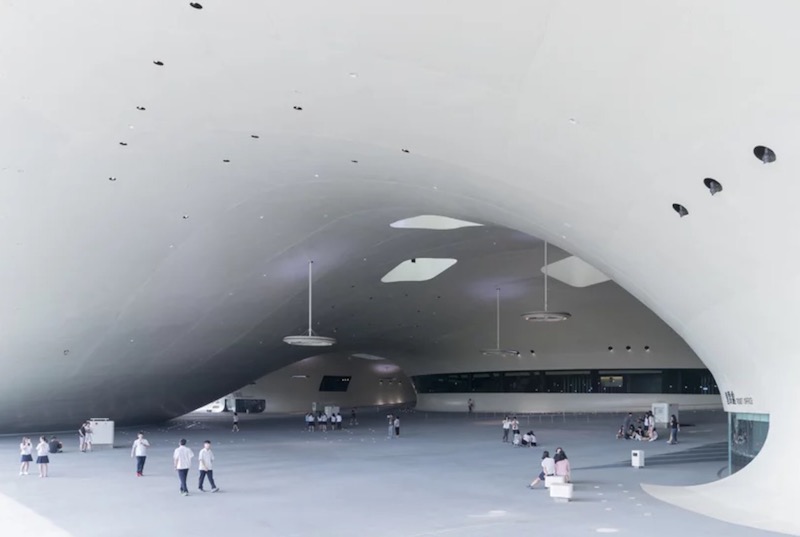 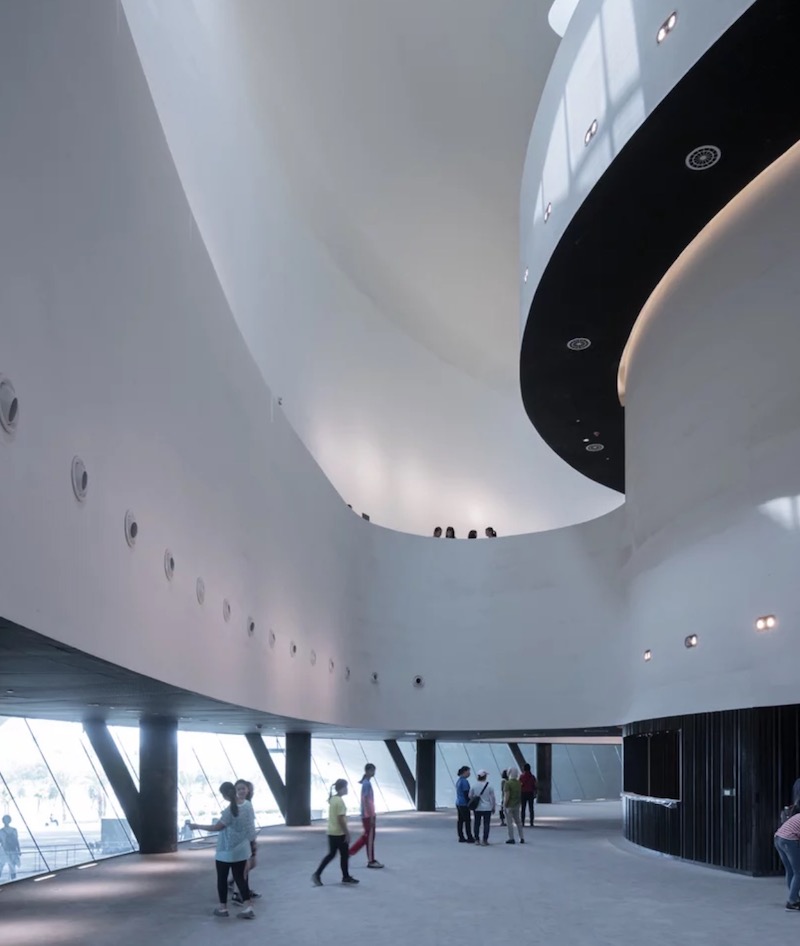 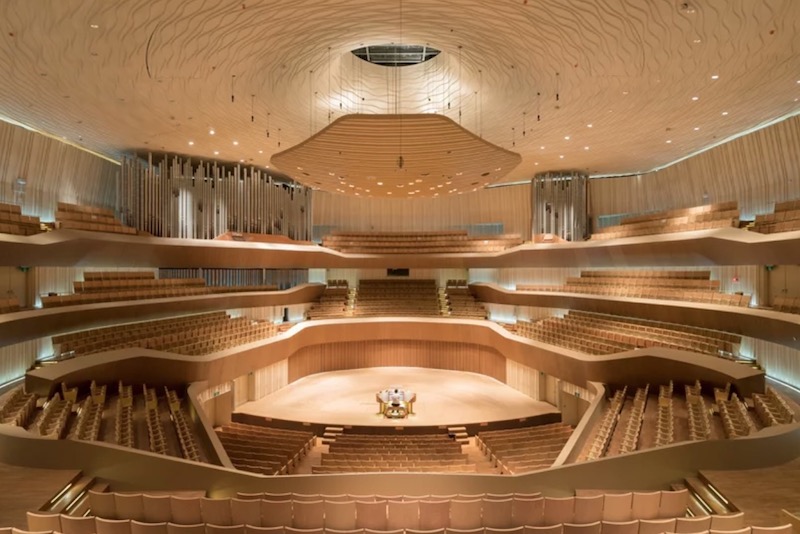 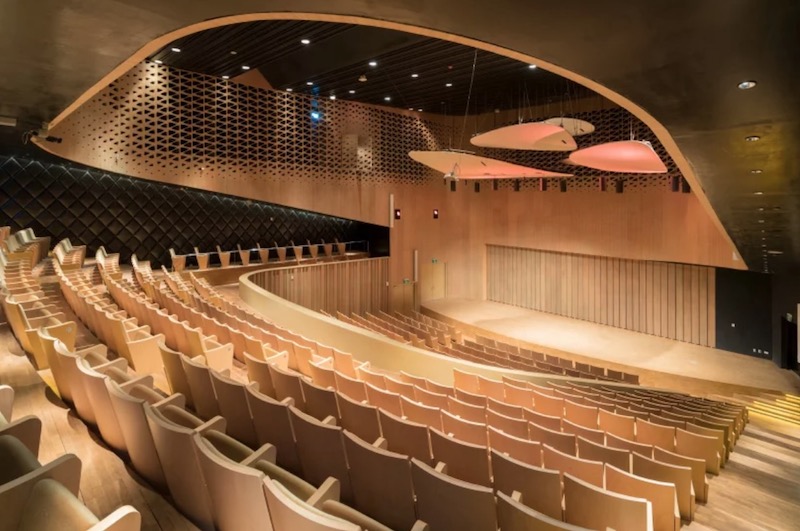 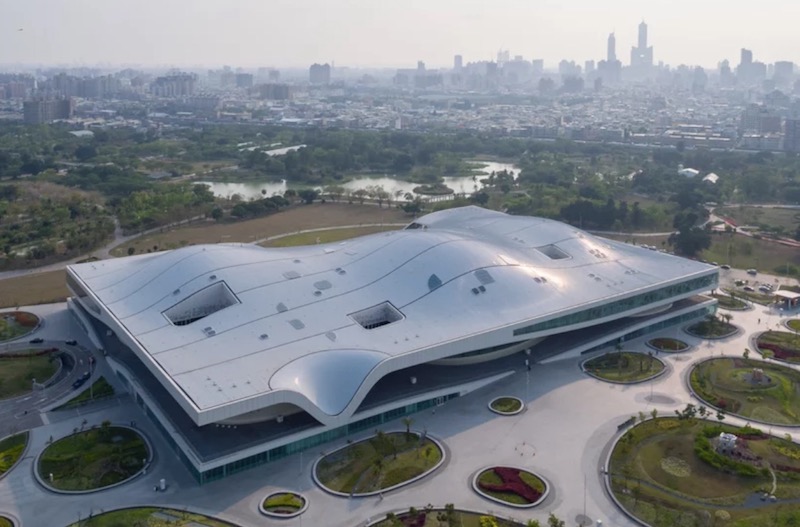 Taiwan’s recently opened National Kaohsiung Centre For The Arts, Weiwuying – a vast performing arts venue (the world’s largest by far) covering 35 acres of a 116 acre park in the southern port city of Kaohsiung.

The undulating structure, built by Dutch engineering firm Mecanoo and inspired by the undulating canopy of local banyan trees, incorporates a 2,236-seat opera house, a 1,981-seat concert hall, a 1,210-seat playhouse, a 434-seat recital hall, and an outdoor theatre built into the sloping roof.

After the closure of Cork Community Print Shop and the downsizing of Camden Palace Hotel comes yet another blow to a Cork arts scene feeling the combined pressure of the property bubble and a lack of existing licenced venues.

Sample Studios is now being ordered to evacuate the former FÁS building on Sullivan’s Quay in favour of building redevelopment.

Artist displacement and venue turnover are nothing new to Cork, but while this hopefully will manifest itself in a vibrant arts community developing in new areas, it’s also a cause for concern for a city that once prided itself on being European Capital of Culture. 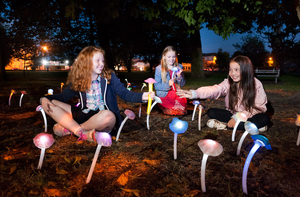 The Imagine Arts Festival in Waterford enters its fourteenth year when it launches on of October 20-30.

Nearly sixty events across all genres and age groups will be happening across the city.

Some of the 2016 festival highlights include a wonderful visual art exhibition opening at Greyfriars Gallery with works from Artists Colin Martin, Martin Gale, Mick O’Dea and Eithne Jordan.

Plus the premiere of a new opera ‘The Green One’, films, theatre and even a hoedown between Ring Gaeltacht Trad musicians and their Waterford city rivals at the John Dwyer Trad Weekend….