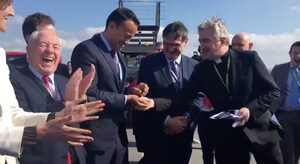 That holy water exchange in full: Jokingly given holy water to take to his next meeting with Boris Johnson, Leo Varadkar asked: “Do I throw it over him?” #Brexit pic.twitter.com/kKBduAVyaZ 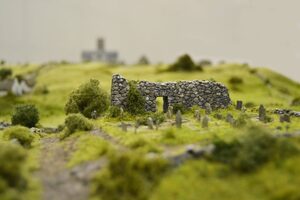 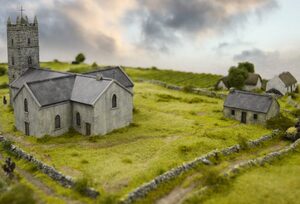 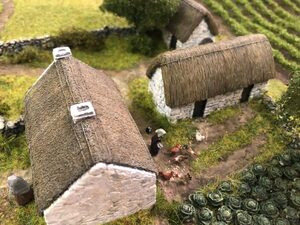 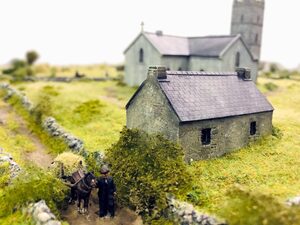 New scale model of Knock parish  as it looked 140 years ago unveiled today at the Knock Shrine Museum (more at link below)…. 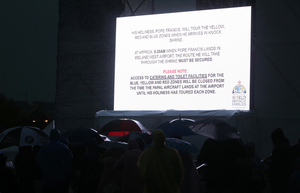 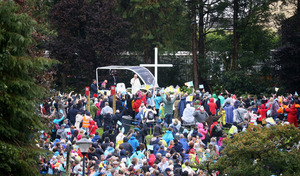 Scenes from the visit of Pope Francis to the shrine marking the spot where local children claimed to have seen apparitions of the Virgin Mary in 1879. No ‘Apparition Wall’ at Knock has my thoughts this morning. Instead, a small field behind this Tuam gate is playing on my mind. Remember them. #796 #PopeinIreland #Stand4Truth pic.twitter.com/OGzJfSBEBO

Earlier: “Pope Francis Must Be The First To Set A Good Example And Resign” Pilgrims at Church of St. John the Baptist in Knock, Co. Mayo, 1879

On this day a century ago, 15 people in Knock, Co Mayo claimed to have beheld apparitions of the Blessed Virgin Mary, St Joseph and St John the Evangelist.

They were taken seriously.

It was a dark, wet night, exactly one-hundred and thirty-six years ago to the day, on 21st August, 1879, when a small group of people claimed to witness a strange apparition in Knock, Co. Mayo.

A Commission of Inquiry was quickly established by the Catholic Church in October of the same year, led by the well-known scholar Canon Ulick Bourke, which found that the witness testimonies were both “trustworthy and satisfactory.”

All told, there were fifteen eye-witnesses, many directly related to one another. The primary witnesses, in the sense that they allege to have seen the apparition without any prompting from anybody else, were Mary McLoughlin, Mary Byrne, Mrs. Hugh Flatley, and Patrick Walsh.

The other observers were secondary only in so far as they were summoned by others, whereupon they witnessed the scene as described. It’s clear that they were told what to expect, and, as we shall see, some never bothered to stay around for any length of time.

The first witness, Mary McLoughlin, housekeeper to the parish priest, Rev. Archdeacon Bartholomew Cavanagh, saw a number of “strange figures” at the gable end of the local chapel at about 7.30pm. Strangely, she passed on by, assuming they were newly procured statues.

She proceeded to the house of Mary Byrne and, after a period of about half an hour, the two returned in the direction of the chapel. Straining credulity, it seems that Ms. McLoughlin never once mentioned the odd statues.

Mary Byrne makes this abundantly clear in her deposition to the Commission, as if to dispel any notion that the housekeeper had been the one to suggest their presence: “I had never heard from Miss McLoughlin about the vision…The first I learned of it was on coming…from my mother’s house…at the distance of three hundred yards or so from the church.”

The two women profess to have seen three figures: the Blessed Virgin Mary in the middle, clothed in white, and crowned; St. Joseph to her right, inclining reverentially towards her; and St. John the Evangelist to her left, holding a book.

It seems as though Mary and Joseph were easily recognisable, requiring no explanation for their identification. However, they managed to recognise John the Evangelist from his statue in the nearby chapel of Lecanvey, close to Westport.

This is ante-Diluvial logic. Clearly the sculptor could not have known the saint’s exact likeness. They also claimed that the figure wore a bishop’s mitre, but the mitre, although it has its precursors, is first mentioned, and first depicted, in the eleventh century. It was not known in the first century.

One can, of course, choose to believe that these manifestations move in mysterious ways, representing themselves in a manner best understood by their audience. It just seems awfully convenient that John was identifiable from a nearby statue.

What of the other primary witnesses? Mrs. Flatley independently witnessed the vision at about 8pm, though she also mistook them for statues, and went on her merry way.

Patrick Walsh witnessed only a “very bright light” about half a mile away from the chapel. Presumably he was too far distant to discern any detail. In any case, he neglects to provide any more information. One is forced to ask, though: if the light was so bright that it was visible for miles around, it seems strange that the vision could be mistaken for mere statues at close range.

The other witnesses all learned of the apparition through Mary McLoughlin and Mary Byrne. One such witness, a five year old boy, was able to state nothing more than he saw some images and the light and “heard people talk about them.”

The most elaborate description, involving an altar and a lamb and a cross, comes from Patrick Hill, a boy of fifteen. As if to constrain his wild imaginings, the others contradict him, and flatly deny seeing a cross.

In addition, the timeline of events, as recorded in their witness statements, is confused, but allowances must be made as regards time, given the miraculous circumstances.

Another curiosity is the fact that nine of the witnesses explicitly state that they left the scene, despite its seemingly miraculous nature. One observer, Patrick Byrne, states soberly that he “remained only ten minutes, and then [he] went away.”

Likewise, Dominick Byrne, Senior, remained “only one quarter of an hour.” Frankly, I’ve stayed longer watching an episode of Coronation Street. This criticism was answered at the time by one witness, Bridget Trench, who claimed she would never have left the chapel if she thought the vision would eventually disappear.

I find this difficult to credit. If you were witness to what one of the fifteen described as “the biggest sight that ever he witnessed in his life,” would you head for the hills after a few short minutes, notwithstanding the rain?

Eventually, Mary McLoughlin went to fetch her employer, the parish priest Rev. Cavanagh. Now, he knew Ms. McLoughlin better than most, but “appeared to make nothing of what I said, and consequently he did not go.”

Once the whole thing took off, however, Rev. Cavanagh, not wanting to be completely left out, claimed to see Our Lady in the privacy of the parochial house.

We must also examine these reports in the context of their time, coming, as they are, at a time of great uncertainty in post-Famine Ireland, with the success of disestablishmentarianism, the rise of Fenianism, and the violence of the tenant Land Wars.

They came also in the aftermath of the dogmatic declaration of the Immaculate Conception of Mary by Pope Pius IX in 1854, and in the wake of similar apparitions in Lourdes, in southern France, in 1858. Nothing ever happens in isolation.

Subsequently, a number of sceptics, including Father Francis Lennon, Professor of Science at Maynooth University, and, separately, a body of some twenty priests, attempted to recreate the apparition using a magic lantern, an early type of image projector, but with limited success. Ultimately, though, what is more likely: that a miracle occurred, or that the eyes of the onlookers deceived them?

It seems far more plausible that one dull, dark, wet night, the village gossip saw a bright light of some description next to the chapel. She interpreted this in the form of Our Lady, straddled by Joseph and John, and encouraged a local girl to go forth and spread the word.

The young Mary Byrne did so amongst her immediate family, and some of these people saw various strange things. In the subsequent hours and days, false memories were forged in the excitement.

Now, there’s a Basilica where there once stood a chapel. It was either this, some form of mass hallucination, or it was worse, it was conscious fraud. After all, Mary McLoughlin has something of John B Keane’s Moll about her, the archetypal manipulative housekeeper.

Simon Hall is a freelance journalist based in Dublin. A brace of American nuns prepare for the start today of a National Novena (NINE days of prayer) where 100,000 pilgrims are expected at the shrine for a rosary-a-thon.

‘Lil’ Mother Lucille (second left above) was the first nun to complete a ‘decade’ in under eight minutes.

Earlier: Bring Your Own Beads “About 200 people are expected to accompany Cardinal Timothy Dolan, Archbishop of New York, on the first chartered pilgrimage from that archdiocese to Knock shrine this month. Cardinal Dolan will open this year’s national novena at Knock on August 14th. It continues until August 22nd.”

You’ll recall Cardinal Timothy Dolan was the man sent to Ireland in March 2010 by Pope Benedict to lead the Apostolic Visitation to Ireland and examine the country’s four archdioceses in the wake of the sex abuse scandals.

In May of 2012 the New York Times reported Dolan authorised payments of as much as $20,000 to sexually abusive priests – when he was the archbishop of Milwaukee – as an incentive for them to agree to be dismissed from the priesthood.

The documentary Mea Maxima Culpa: Silence In The House of Good documented the crimes of one of those men, Fr Lawrence Murphy, who abused hundreds of deaf children.

You may also recall how the Survivors Network Of Those Abused By Priests reported on October 23, 2013 how:

“[US District Court] Judge Rudolph Randa [yesterday] ruled that a deaf survivor of Fr. Lawrence Murphy is bound by an agreement he reached with church officials even though he was deceived in order to secure that agreement. The agreement was reached in an archdiocesan program designed by [Cardinal Timothy] Dolan in 2003. We believe the purpose of that program was to quickly and quietly settle with victims while deliberately misleading them about the archdiocese’s prior knowledge of the criminal history of abusers. At the same time, it induced victims to accept nominal restitution in exchange for waving all future legal rights. If the victim would later discover they had been deceived by Dolan and the archdiocese, as we now know they were, they would have no legal recourse.”

On this day in 1984, RTÉ broadcast a report by Jim Fahy on Knock Shrine Medical Bureau.

It had been set up to establish if cures claimed in Knock, Co. Mayo, were medical or miracle.

Anyone for the last few choc ices?