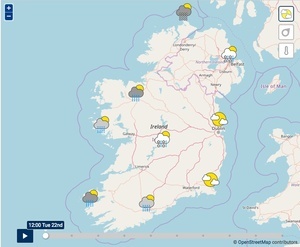 Occasional wintry showers in Ulster and Connacht with a risk of snow on high ground, especially in Co. Donegal….

I get fashion, well I have some idea😁 but honestly wearing no socks in this weather isn’t fashion, it is just silly. Standing outside with a group of people today and those with no socks keep twitching and shaiking feet 🤷‍♂️ pic.twitter.com/7okc9492uj 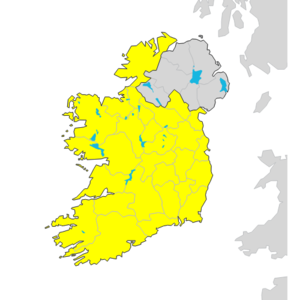 Met Éireann has issued a Status Yellow snow-ice alert which will be valid from 9pm tonight until 7pm tomorrow night, saying:

“Icy and slippery conditions expected due to accumulation of ice and snow on untreated surfaces.

“Scattered sleet and snow showers most frequent across Ulster and Connacht will occur but some showers penetrating into central and eastern areas at times with the odd flurry further south.

High resolution charts showing the band of rain/sleet/snow tonight. Shaded = sleet/snow which you can see for a time in some areas before turning to rain. pic.twitter.com/rpDoSlTsse A few of the birds which went missing from Marlay Park, Rathfarnham in March

Several rare exotic birds from the park’s aviary went missing during the snowfall.

They have been since March, when heavy snowfall covered the aviary in Marlay Park, and some of it collapsed. Around twenty-four exotic birds escaped.

The enclosure was buried under 10 or 15 inches of snow. So it’s little surprise it caved in, says King, who has been aviary watchman there since 2013.

“The snow blew up in drifts onto the roof,” he says.

In the last six months, he has tracked down 10 of the birds and brought them home, with the public’s help. More than half of those that escaped are still on the loose, though…

Six Months After the Snow, Exotic Birds Are Still Missing from Marlay Park (The Dublin Inquirer) A woman walking in the snow in Glasnevin on March 4

I note that the current hospital bed crisis is in part due to pressure from slip and falls that occurred during the recent storm.

One contributing factor must be our apparent inability to clear snow from public paths and around homes.

This is not due to laziness or lack of civic pride but rather equipment failure.

I cleared 20 metres of snow at 8am each morning with a €7 snow-shovel.

I noticed other people using spades, garden hoes and even fireside shovels in futile attempts to keep paths clear.

What would be the cost saving to thousands of €7 shovels being left in town centres and on street corners during such weather events – allowing us all to play our part in keep this country moving and injuries down?

We could even allocate Tidy Towns points for additional motivation!

For the price of a shovel (Irish Times letters page) Great few days out wandering, taking snaps, having fun and ‘working from home’ in Ranelagh (Dublin 6) Lads is the 65 running to Ballyknockan or what’s the craic? The 5th lock gate and [Grand] canal freezing over… Feed the birds…they are struggling

Guys!! The fence around St Stephens Green is ideal for halved apples. The birds will thank you for it #FeedTheBirds cc .@BirdWatchIE pic.twitter.com/g8xu9Tz5Nz