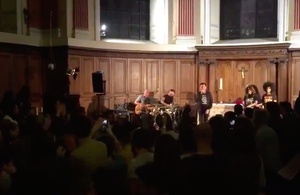 Son saw Rick Astley in the chapel in Trinity this evening :) pic.twitter.com/5XqxyR6ZVW

Rick Astley, the 1980s pop star famous for his hit “Never Gonna Give You Up” – and the phenomenon of rickrolling – performed in an intimate gig in Trinity’s Chapel.

Billed as a “Secret Chapel Gig” by Trinity College Dublin Students’ Union (TCDSU) and Trinity Ents, the concert was attended by students and staff alike. This week a petition was launched at Trinity College Dublin, calling for the removal of The University Times‘ editor’s salary and their on-campus accommodation from 2020/2021.

The newspaper has claimed that the petition, if successful, would also see the paper get just €3,000 a year to go towards publishing in print – and this would cover just one issue.

It follows the newspaper placing a recording a device outside an on-campus apartment where an initiation ceremony took place of an “elite, invite-only Trinity sporting society”, called the Knights of the Campanile.

“UT have claimed that RTÉ and The Irish Times have used the same methods of source-gathering in the past, but this is not true. Those organisations have never bugged anyone’s home.

“Another crucial difference is that their biggest intrusions were overwhelmingly in the public interest – which is the test applied by courts when trying to establish whether this kind of reporting is legal – as when an RTÉ researcher posed as an employee of Áras Attracta to expose abuse against residents there.

“Whatever you think about The Knights of the Campanile’s “hazing”, it is in no way comparable to such abuses.

“UT’s behaviour is better compared to the News International phone-hacking scandal in the UK in 2011, in which News of the World bugged many high-profile people in British society, including Gordon Brown and the Royal Family. The scandal was so great that it led to the closure of News of the World.”

“The reaction from the Knights of the Campanile has been predictable, but we are more concerned by the response from our fellow journalists in Trinity News, who have essentially called for us to be defunded.

“We stand by our story and the techniques used to report it. We will resist any effort to defund the paper or to chill our future reporting.” “This is a once-off exception to general regulations. No folding chairs will be permitted at any other event’

Vital planning ahead of concerts by Grace Jones, 70, next Monday and Bryan Ferry, 72, next Thursday at Trinity College Dublin.

Those going to Gavin James on Saturday will have to stand and frug. ‘Two screens, one located in New York and the other in Dublin create a live audio visual link. Passers by notice the changing image, sound, sky, wind and weather in the linked place and on approach are able to chat to people over there.’

Irish architect Cathal Curtin has launched a unique new project on Kickstarter to digitally connect New York and Dublin. It would allow friends and family (and strangers) to speak, see and interact with each other right from the heart of each city (Trinity’s front square in Dublin and DUMBO in NYC). Anyone who supports it, can have their name, or that of a friend, engraved on the structure in Dublin or NYC. A new book [Dublin Architecture – 150+ Buildings Since 1990] honours Trinity’s Berkeley and Usher libraries as two of the best buildings in Dublin.

It’s true they are beautiful, if you like bare concrete and wood panelling, but the ceilings let water in and you can kill twelve students by closing a door.

Broadsheet has some knowledgeable archibuffs. What’s so good about these buildings, apart from the impromptu waterslide and death chamber?

Architecture: Not everything built in boom was rubbish (Irish Times)

If you have a problem if no one else can help and if you can find them maybe you can ask a Broadsheet reader? Broadsheet@broadsheet.ie By artist Sean O’Dwyer, who featured on RTÉ’s Liveline earlier today teling Joe he drew this after watching drug being sold outside the front gates of Trinity College Dublin.

Mercy has just had her shoes nicked. A bunch of Mac computers openly dumped outside… Celtic Tiger is roaring again.