Just took this screenshot and it’s clear that aviation although reduced is moving around Europe but Ireland looks deserted and the flights passing over are heading for European destinations. Our government are destroying aviation and tourism, not the pandemic. pic.twitter.com/ZNZYKvplQi 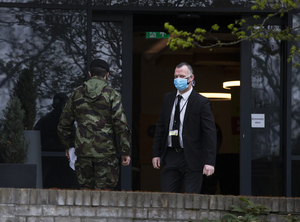 He asked why Ireland was the only country in Europe to impose mandatory quarantine even on vaccinated travellers.

“The message is we don’t want people travelling to the country.…

“Freedom of movement is a fundamental principal of the EU. That is what has upset me most.

“If these people are vaccinated then these restrictions should be removed. Why do you want to lock up people who have been fully vaccinated?” From top: James McManus and Shane Dunne; Inside Business podcast

How are small businesses linked to tourism and entertainment coping with the coronavirus?

“The government are great at using the craic and the ceol for soft diplomacy, you know, we’ve a seat on the UN Security Council that came from a U2 gig. They go to [Washington] DC every Paddy’s Day with the bowl of shamrock, you know, and talk about the music from Ireland.

Well the next time they go, it probably won’t be next year, probably 2022, but, you know, they can hang their head in shame because, at this point, they’re completely ignoring it.

There’s a lot of money in that stimulus package, it’s seven of eight billion but it appears again that we have a Government who have just scatter-gunned it all over the place without really putting any thought into it.

And they’ve left two industries, aviation and tourism are are part of those where they’ve just kind of gone ‘well, screw you’, you know, ‘we’ll let you fall‘.

Michael McNamara, the TD from Clare who is the chair of that [Special Covid-19] Oireachtas committee, you know, had a very good one line.

I think he said ‘In the time of clerics, the arts survived but in the time of medics, it’s going to be let go to the wall’.

[Michael McNamara’s exact quote: “I am perplexed by the fact that it is acceptable to have 150 people in an aircraft for three hours yet 150 people in the Abbey Theatre is a threat to life. That is nonsense. During the reign of clerics, the arts were supported but it seems during the reign of medics, they are left to go to the wall.”]

What life will be left for people when this is over if all of these businesses, you know, do fail.”

The issue for James McManus and Earth’s Edge is that the Temporary Wage Subsidy Scheme (TWSS) is being halved from €410 per week to €203 per week on August 31.

He said he’d be happy to get a loan but it wouldn’t be sensible given he’s no money coming in.

“I just know with this scheme if you’ve kept staff on, your costs are going to double so, we really need some help.

“But from the first of September, we’re getting our funding cut in half. And we’re already losing money, we’ve already dropped staff so it’s a real problem.

I can’t see how it makes financial sense to not continue to support it. The long-term pain is going to be greater if we shut all these small businesses down.

And what I don’t understand is if we can, as a country, if can borrow this so-called free money, at such low interest rates…you’ve a country like France, they’re extending their wage subsidy scheme for another two years, Germany are out until 2021, the UK’s is running longer than ours.

And this is in, we’re talking about three weeks’ time when this is ending and it’s just on a knife edge for us so we really need the support and we need it right now.” This month’s cover of Dublin Inquirer by Conor Nolan.

In the Dublin Inquirer, he writes:

F or this cover I wanted to focus on the subject of overtourism and the cost of it to the city.

I came up with this idea of a character looking like they’re shadily dealing out the city. Previously: And So It Begins The world mapped out with every country’s tourism slogan.

Yes, Jump Into Ireland is ours, apparently. The first in a series (three more are on the way) of vintage style posters for some recently discovered exoplanets created by NASA Jet Propulsion Lab visual strategists Joby Harris, David Delgado, and Dan Goods. An illustrated Irish plea from Korea.