In the Four Courts.

Supreme Court judge Peter Charleton, who oversaw the Disclosures Tribunal in respect of its terms of reference (a) to (o), which included the examination the treatment of Garda whistleblower former Sgt Maurice McCabe, heard submissions from various parties in relation to costs.

He said his final decision on costs will be posted on the Disclosures Tribunal’s website.

Former Garda commissioner Martin Callinan will not have to pay any legal costs in connection with his representation at the Disclosures Tribunal, despite its findings he waged a “campaign of calumny” against whistleblower Sergeant Maurice McCabe.

Mr Callinan was represented by the Chief State Solicitor’s Office at the tribunal and his legal bill is being paid out of the taxpayer-funded office’s resources, sources have told the Irish Independent.

However, former Garda press officer David Taylor, who assisted Mr Callinan in the campaign, could have to pay some or all of his costs.

The media group Independent News and News (INM) says it will not appeal a ruling to appoint inspectors by the corporate watchdog.

It means inspectors from the Office of the Director of Corporate Enforcement (ODCE) can take up their duties from today.

Costs were also awarded in favour of the ODCE. 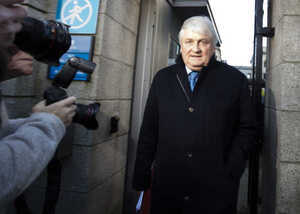 The High Court has ruled that businessman Denis O’Brien should pay all the costs of his failed action over statements made by two TDs in the Dáil about his banking affairs.

Mr O’Brien took his case against the Clerk of the Dáil and the State over comments made by Social Democrats TD Catherine Murphy and Sinn Féin’s Pearse Doherty in the Dáil in 2015.

He wanted the court to reprimand the TDs and he claimed they had interfered with a court case he was taking against RTÉ.

…This morning, the judge [Ms Justice Úna Ní Raifeartaigh] ruled that the facts of the case were unusual and had some degree of novelty as well as being of some public importance.

…But she ruled there was “an insufficient degree of novelty” to cause her to depart from the normal rule where the losing party pays the costs of a case.

Former CEO of the Rehab group Angela Kerins has asked the High Court not to award costs against her for her failed legal challenge to the Dáil’s Public Accounts Committee.

Lawyers for Ms Kerins told the three-judge divisional High Court the case was an “exceptional one”.

…This morning, lawyers for Ms Kerins began submissions in her application regarding costs of the action.

Senior Counsel John Rogers said he would be asking the court to depart from the norm where the losing party bears the costs of the action.

Kerins asks court not to award costs against her (RTE)

Terry Dignan’s car insurance has risen from €470 to €886 in just four years. Let me advise Mr Dignan that this is not despite his being 13 years with the same insurer, but because of it.

From first-hand experience of writing premium calculation software for the motor and home insurance industry, I can assure him and all your readers that there’s an in-built “inertia penalty” for such customers.

As a general rule of thumb, if at renewal time a private motorist is obtaining fewer than five quotes – including at least one via a broker – then he or she is almost certainly throwing away money.

Coincidentally, I too have been driving for 25 years with no claims. The difference is that I’ve never used the same underwriter for more than three years in a row.

Mr Dignan is, of course, still right that the Government should take a close look at the industry.

The cost of motor insurance (The Irish Times letters page)

On Thursday evening, Independent TD Stephen Donnelly, among other Opposition TDs, asked Environment Minister Alan Kelly if the water charges would lead to a net income or deficit for the State.

Specifically, there was confusion over whether the €100 water conservation grant will cost the State €130million or €166million – as it wasn’t clear how many households will receive it.

During the debate Mr Donnelly, and other Opposition TDs, repeatedly requested that the Committee stage of the bill be adjourned to allow for Mr Kelly to obtain the correct figures.

As the debate drew to a close, there was this exchange:

Stephen Donnelly: “As of now, the people of Ireland will pay €271 million for their water and the benefit to the State at best will be €37 million and may be negative. This case, irrespective of whether there is a net benefit or cost to the State of charging people for water, is fundamental to this legislation. Can we please, in the interests of good parliamentary and legislative work on all sides, adjourn and come up with the figures? We have an independent expert…”

Alan Kelly: We have the figures.”

Sandra McLellan: “They are wrong.”

Stephen Donnelly: “We have an independent expert which can study the figures, the CER. It already has an opinion paper on this. Let us come back next week with figures everyone can agree on, please.”

The debate resumed on Friday morning and the confusion over Irish Water’s costs remained with Independent TD Róisín Shortall later getting suspended from the Dáil.

Before her suspension happened, the following exchange took place.

Róisín Shortall: “One of the most important roles we have, as Members of this House, is to scrutinise legislation. That is what Members on this side of the House were doing last night. They asked very straightforward, pertinent questions on the financing model of Irish Water. Regrettably, the Minister was not able to answer those straightforward, fundamental questions about his proposal. Overnight, we thought the Minister would check out the position…”

An Ceann Comhairle (Sean Barrett): “I am sorry but we are now dealing with section 7, which is about the setting up of a forum. Deputy Shortall should please speak to the section.”

Shortall: “I appreciate that. We expected the Minister to be in a position to answer those very basic questions this morning. It is a matter of extreme regret, a Cheann Comhairle, that when you came into the Chamber this morning, you came with the intention of shutting down the debate.”

Barrett: “I certainly did no such thing. Deputy Shortall should not make such a charge against the Chair.”

Shortall: “A Cheann Comhairle, your role is not to protect the Minister and silence the Dáil.”

Barrett: “It is not Deputy Shortall’s role to make a charge against the Chair which is totally and utterly untrue.”

Shortall: “Your role, a Cheann Comhairle, is to uphold the rights of Members of this Dáil.”

Cathal MacCoille: “Minister Alan Kelly said that this so-called Water Conservation grant, this cash payment to everyone who signs up for water charges, whether they pay them or not, would at one point 1.3million households in the State cost €130million in a full year and yet it was pointed out immediately to him, from the Opposition, that there are 1.6million households and therefore the cost would not be €130million but €160million-plus. Can you explain the confusion for us?”

Paudie Coffey: “Well, first of all, I want to state clearly and, as has already been stated in the Dáil that the €130million allocation is a budget allocation for a demand-led scheme. That it’s not possible for anybody to know how many will actually register at this particular time. So the budget is allocated at €130million. I want to make it also clear that it’s not part of Irish Water, and this is where the Opposition have been trying to…

MacCoille: “Let’s just stick to the figures. There are 1.66million households in the State. Are you saying that the Government is working on the basis that not all of them will claim and that therefore it will cost not €166million but €130million. Is that the basis of your calculations?”

Coffey: “Any demand-led scheme that has been operated in the past by any Government or indeed this government has never had 100% take-up, for various reasons. Some of it might be non-compliance and some of it might be just that people don’t register. So it’s a Budget allocation. But the important point here is, if the demand exceeds the Budget allocation, additional resources are then provided. But the important, and most important point here, is the €130million conservation grant is not part of the Irish Water expenditure funding model. And this is where the Opposition are trying to, I suppose, stitch it into it, to try and create obstruction and confusion. But the most important point, I would like to make is this legislation that’s now being passed is for three reasons. One: it’s to cap the charges to make it more affordable, it’s to remove the power of Irish Water to turn off or turn down water in the event of non-payment, which incidentally Fianna Fail opposed, and also it’s to provide a €100 grant for every household…”

MacCoille: “Have you any idea how much this [the water conservation grant] is going to cost and whether extra staff will be needed?”

Coffey: “Well, first of all, can I say that this is typical of the hypocrisy of Fianna Fáil who, in their national recovery plan, had committed to raising €500million per annum from water charges by 2013. What the Government is doing under the current Irish Water funding model, which I have to say, has been subject to full independence, financial and economic analysis by the Commission for Energy Regulation and that is there for all to see on the commission’s website, fully published and fully analysed…”

MacCoille: “Do you know how much the water conservation grant as you call it…”

Coffey: “..separating the water conservation grant from the Irish Water funding model because Opposition are bringing this onto the pitch to try and say that Irish Water’s funding model is not sustainable.”

Coffey: “We need to raise [inaudible] euros per annum for Irish Water to leverage and additional €600m off balance sheet. The Opposition have no alternative for that cost.”

MacCoille: “Will the water conservation grant cost, do you know how much it will cost and will it need extra staff?”

Coffey: “The water conservation grant will be administered by the Department of Social Protection from its existing structures. There will be some additional operations, logistical and IT resources needed but not anything like the Opposition are trying to say.”

MacCoille: “Well, have you a bill?”

Coffey: “It will be done for a relatively cheap cost.”

“The Corrib Gas partners are now counting the cost of a contentious An Bord Pleanála ruling as the bill for the project is set to hit almost €3.4 billion before the end of next year.

“The 2012 outlay brought the total spend on the project to €2.68 billion at the end of December last.”

“Work continues on the 5km tunnel to bring the gas ashore and a Shell spokesman confirmed yesterday that a further €380 million will be spent on the project this year with a projected €300 million to be spent on the scheme next year.”

“The firm expects the tunnel to be complete by the middle of next year with the first gas to flow by 2015.”

“The spiralling costs associated with the €3.36 billion project make it the largest commercial investment by private investors in one single project in the history of the State.”