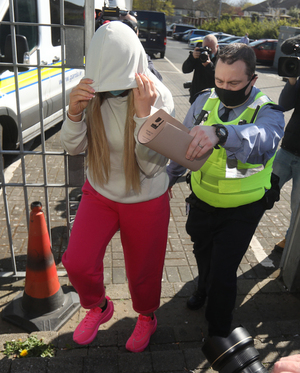 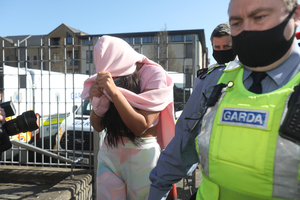 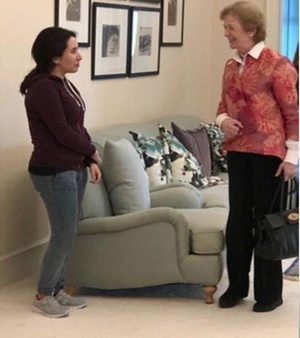 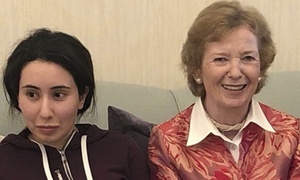 On Christmas Eve, the family of an Emirati princess released pictures to rebut ‘false’ abduction allegations.

Sheikha Latifa bint Mohammed al-Maktoum, 33, daughter of Dubai’s ruler, Sheikh Mohammed bin Rashid al-Maktoum, was seized from a yacht off the coast of India in March and had not been seen from since.

In the pictures, Latifa appears alongside former Irish President Mary Robinsonn, who the UAE foreign ministry said was invited by her family to meet Latifa.

In a video  made before her escape (above), Princess Latifa said she spent seven years trying to flee a gilded prison and feared torture if captured.

“The dilemma was that Latifa is vulnerable, she’s troubled. She made a video that she now regrets and she planned an escape, or was part of a plan of escape,” said Robinson, who told how she had lunch with Latifa, Hayat and others and was able to “assess the situation”.

Robinson said the princess was receiving psychiatric care, adding: “She’s a very likeable young woman but clearly troubled, clearly needs the medical care that she’s receiving.” She said the family “did not want her to endure any more publicity”

Robinson faced intensive criticism on Thursday from rights campaigners, with one alleging she had been “used as a willing pawn in the PR battle between the UAE ruling family and the rest of the world”.

There was also a sceptical reaction from Human Rights Watch (HRW), which was name-checked during a BBC interview on Thursday with Robinson, who said she had been asked by Princess Hayat, one of the Sheikh’s wives and someone she had known for a long time, to come to Dubai to help with a “family dilemma”.

“Mary Robinson said in the BBC interview that Princess Latifa is ‘a troubled young woman’, though I would be troubled too if I had tried to escape a gilded prison and was kidnapped back into it,” said Roth.

Radha Stirling, the chief executive of the Detained in Dubai group, said listeners to the interview with Robinson would have been “astonished at the extent to which Ms Robinson appeared to be reciting almost verbatim from Dubai’s script”.

Meanwhile, via the BBC:

“Mrs Robinson appears to have spent a couple of hours with Sheikha Latifa, and despite having no formal medical or psychiatric training, has somehow diagnosed her condition and concluded that she is receiving appropriate treatment. It is unclear on what basis Mrs Robinson considers herself qualified to do so,” it said in a statement.

Former president, humanitarian, Chair of the Elders, feminist, climate change activist and inspiration Mary Robinson is our overall Woman of the Year 2018https://t.co/9LyBKOxcRA 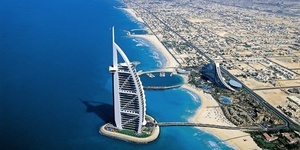 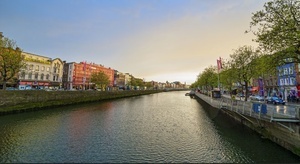 From top: Dubai and Dublin

April 2016: Decided I would leave to pursue a different (dream) career by doing a two-year full-time course that begins in Dublin in September. Would remain in job until then.

May 2016: Applied, interviewed, and got accepted for above course.

9am, end June 2016: At work, was asked to apply for a lucrative role, large promotion in Middle East as I had the most suitable knowledge base in the company.

Mid-July 2016: Decided to go for promotion and put off the dream job prospect.

Every day since: Changed mind.

Last 24 hours: Decided finally on the course in Dublin.

9am, this morning: Informed boss.

9:30am: Received meeting invite from HR in Middle East to congratulate me on being the successful candidate and would like to discuss packages, etc.

I’ve stuck with my decision and have since informed the hiring manager in the Middle East and HR manager here. I’m 32 next month, no kids and no mortgage. I’m leaving a well-paid role in an industry I really don’t care about to probably make a net personal loss over the next five years, in pursuit of my dream career – moving from engineering to creative – moving to Dublin, rather than Dubai, from somewhere else in Ireland.

Can your balanced and considered readers please inform me if I am crazy? Any advice or experiences to share now that I’ve made the decision? 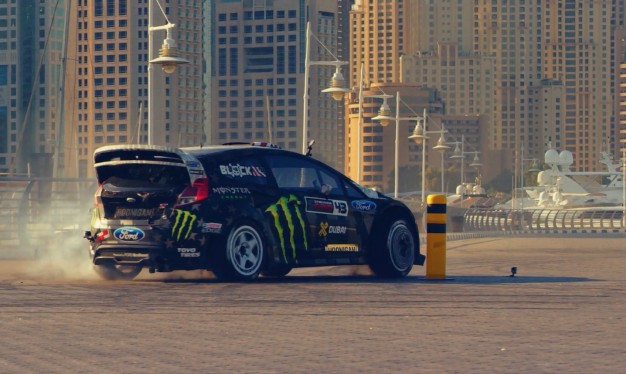 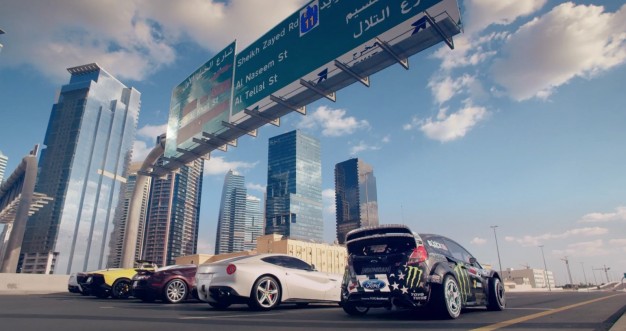 US rally driver Ken Block rorts a souped-up Ford Fiesta around the streets of Dubai. 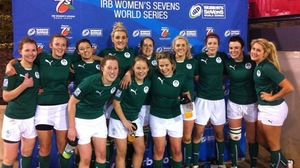 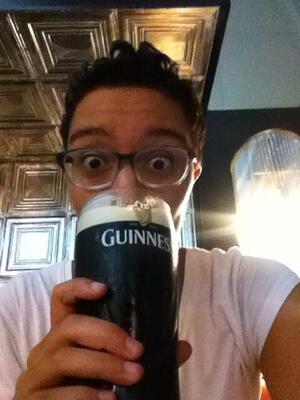 About to pay 10USD for a pint of Guinness at Dubai airport. How’s that for overpricing?

Pretty reasonable for Dubai in fairness.

Nothing says Dubai more than a re-worked Eagles cover performed by an oversized Leprechaun.

On a Sheikh Zayed Highway, Warm wind in my hair.
Warm smell of Sheesha, rising up through the air.
Up ahead in the distance, I saw a shimmering light.
I said, “that’s either a stalagmite, or it’s the Burj Khalifa alright!”

A model met me at the doorway, and a big big bouncer as well.
I was thinking to myself, “This could be heaven or this could be hell!”
I asked if they took cobone discounts, she said “No Sir, NO WAY!”
There was a Paddyman singing in the corner, I thought I heard him say:

So I called up room service, please bring me your best wine
He said, “That’ll be a million dirhams” and I said. ‘That’ll do just fine!”
So I drank it with chicken wings and hamburgers for fun.
And to wash down the chocolate cake, I ordered another one.

Last thing I remember I was running for the door.
They finally checked my credit card and their jaws dropped to the floor.
“Relax” said the night man. ‘I’m from country Kerry. I’ve been working here to pay my bill since 1963!” 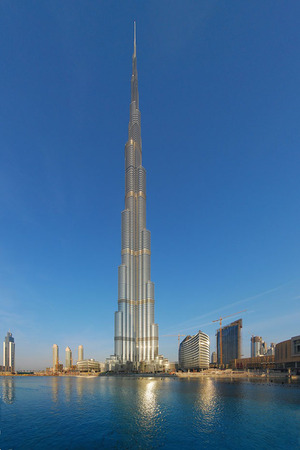 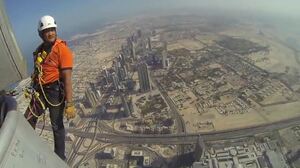 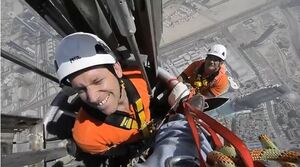 Check out Joe McNally swinging off the top of the Burj Khalifa [Dubai]. Watch full screen in HD for complete knee wobble experience. 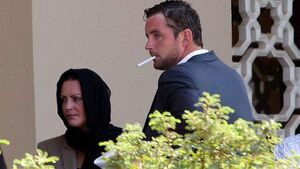 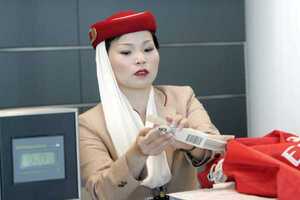 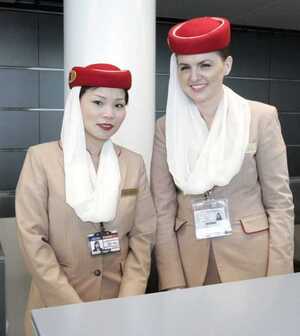 Megumi Munay (top and above left) and Natalie Lehal greet passengers for the first day of the new Emirates Airline Dublin-Dubai flights from Terminal 2 literally about an hour ago.

Except, you know, anyone carrying an Israeli passport.