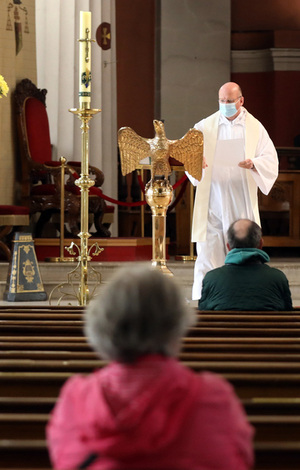 No Pastor Artur, in fairness. 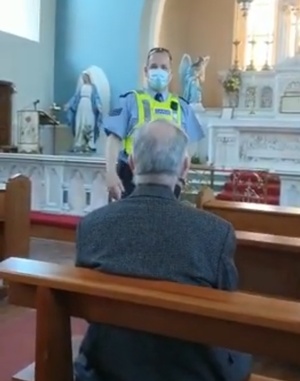 Gardai in Athlone have confirmed that no fixed charged penalty notices were issued for breaches of Covid-19 regulations after they attended a church in Athlone on Sunday morning.

Officers spoke to a number of people who gathered at the church in the town for an early morning mass just after 10am.

Video footage of gardai speaking to people inside the church and outside has been shared online and Gardai have confirmed to Shannonside FM that officers engaged with those present and all persons complied with direction from Gardaí.

No fines issued after Gardai attend mass in Athlone (Shannonside)

If this was a Mass the Gardaí would be on the scene to break it up. How is this more essential than socially distant worship or somebody opening their business? One rule for them… https://t.co/NUslrjomSj 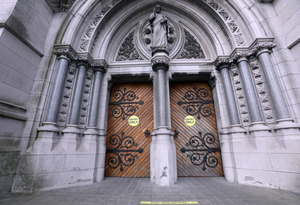 Just a few weeks ago, the Court of Session in Scotland ruled that government closure of houses of worship was unconstitutional and a breach of the European Convention on Human Rights.

In essence, the court held that, while coronavirus restrictions are necessary, they must be proportionate.

This may not be the product of a court gone rogue.

Indeed, courts around the globe have reached similar conclusions. In the US, the Supreme Court has tossed out restrictions on religious worship in several recent cases (see, for example, Roman Catholic Diocese of Brooklyn v Cuomo).

Closer to home, last November the French Conseil d’État overturned limits on religious worship, calling them disproportionate and a “manifestly illegal attack” on freedom of religion.

It is important to add that judicial scrutiny of Covid-related laws has been more frequent internationally and not simply limited to religious rights.

Indeed, the Conseil d’État in France has been particularly hawk-eyed when it comes to restrictions. For instance, it ruled just over a month ago that a total ban on senior citizens leaving their nursing homes was “disproportionate” because it would, among other reasons, “alter their physical and psychological state”.

The global cases cited above should be food for thought for courts here, and especially for Irish citizens, whose physical and psychological states may be similarly “altered”.

If we are to live under changeable restrictions for the foreseeable future, more exacting scrutiny by the judicial branch could be brought to them, ensuring they are above all proportionate.

Yesterday: Get Off Your Knees

Mass is so important to many people, Fr PJ Hughes says mass for parishioners in Mullahoran, Cavan today #capturinghistory @ppai thank you to @IrishTimes @BryanJOBrien for the pick pic.twitter.com/4e7h8akd13

A Garda checkpoint stopped mass goers as they arrived at the church.

“A guard told me that I was putting the lives of elderly people at risk. It’s a sad day that three Garda cars are circling around this church. Have they nothing else to do? God help us.

“It is our faith that brings us here and they told me that I wasn’t reading the statistics and didn’t know what was going on. I told them I did not accept the negative message being poured out by RTÉ. It’s not fair.

“This is sectarianism. This is against our faith. It’s a sectarian act against our Catholic Church encouraged by the Government who don’t believe in God anymore.” Outside Our Lady of Lourdes church yesterday morning

The vast majority of the persons who attended the Sunday Mass in Mullahoran this morning travelled from outside the county and the designated 5km.

Its understood that several attendees travelled from as far afield as Leitrim and Roscommon to be there.

A number of on the spot fines were issued to those in breach of current health regulations.

In a statement, An Garda Siochana confirmed that they were “aware” of a religious service taking place where they “engaged with those present”.

“Do you believe in Covitt?” – Hard to believe this isn’t satire lmfao pic.twitter.com/54mY0zHVod

Paul Murphy is “horrified” by mandatory quarantine, whilst at the same time being largely and complicitly responsible for it.

The Left in Ireland make the Right look lame. https://t.co/wPmx5WtMAG 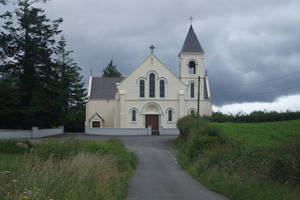 …any of your readers opposed to restrictions living within 5km of Mullahoran, County Cavan? The parish priest there [Fr PJ Hughes] has bravely promised to celebrate mass on Sunday despite a fine and further threats for holding a service earlier this month. I believe he is within his rights to say mass for his parishioners  and wish other priests would follow his lead. I think anyone who is opposed to lockdowns – whatever your denomination or none – should  go to his mass! 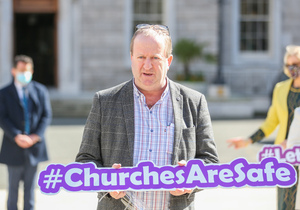 Independent TD for Cork South West Michael Collins (above) along with a coalition of  TDs speaking to media outside Leinster House today, as they call on the Government to ensure that churches are reopened for worship by Easter. 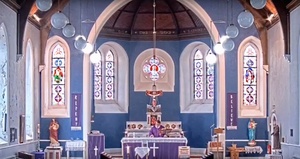 “Black the Ripper, a wee bit of rap in the morning wakes you up.”

Father Pat was taking part in a live-stream at the empty church when he accidentally started playing a track by late British rapper Black the Ripper over the sound system. A service at The Pro-Cathedral, Dublin in June

Why is mass off?

In your report that Catholic archbishops have requested a meeting with the Taoiseach to address concerns about the loss of Mass services , you state that under Level 3 “all religious services must move online”.

It is important to be clear about the precise situation.

With the exception of funerals, where attendance is limited to 25 people, there is currently no legal prohibition on religious services, nor restriction on the numbers who can attend.

The Government has issued advice against the holding of religious services. There may well be good reasons for this advice. But if the churches consider that the advice is misguided, they may hold religious services without breaking the law. 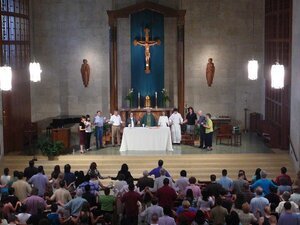 The line-up of readers and singers for this Sunday’s Mass has arrived.

Lift up your hearts. The Church of Our Lady & St Michael.

A priest in the Irish town of Ennistymon denies a number of travellers entry into a church because he deemed their outfits as “Inappropriate”. Even though the skirt was the same length as a number of Non Traveller attendees. Her arms were also fully covered… 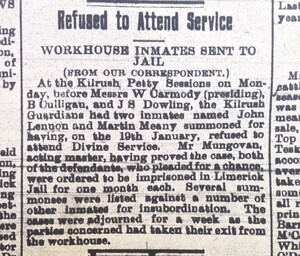 From Liam Hogan‘s excellent History is What We Choose To Remember blog.